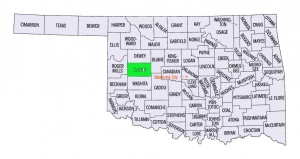 Sixty years after the original settlement the group numbered only about 90 baptized members. This congregation never had a major schism, but like many other similar groups it has endured much internal strife in its effort to maintain a strict "no-change" policy and a number of concessions had been made by the mid-20th century. In the meantime, however, some of the more progressive members transferred to Pleasant View Mennonite Church (Mennonite Church) north of Hydro. Still others moved to other states for various reasons.

The Amish were located between Thomas and Weatherford, but when they first arrived neither of these towns existed and their nearest railroad station was at El Reno, about 65 miles (105 km) east of the settlement. There were no bridges and a trip to town involved the crossing of two rivers and a number of creeks and canyons and required about three days of hard driving with a team and wagon. In the fall of 1898, the town site of Weatherford was laid out and the Rock Island track was built to it from El Reno. These early settlers experienced the hardships of pioneering at first hand, living in roughly constructed log houses and even dugouts.

The first Amish church service was held in a dugout in 1898 on a farm owned in 1953 by Joseph J. Miller. Services were conducted by Bishop Jonas Bontrager of Reno County, Kansas, and the formerly mentioned Jacob Yoder. In 1903 a Sunday school was organized and a meetinghouse was built which still served in the early 1950s for Sunday school and Bible school meetings.

In October 1940 a young people's meeting, at which both young and old participated, was organized under the appointed leadership of Joni A. Yoder and Henry J. Yoder. The leaders for these meetings were elected by a majority vote every two years. These meetings were held every Sunday evening. The larger part of the service was devoted to the singing of Gospel hymns. A pre-selected chapter of Scripture was read and expounded, and following a prayer and a parting hymn the meeting was closed. While a minority of the congregation did not approve of the idea of a young people's meeting, they later unanimously conceded that the system was far superior to the earlier so-called "singings," and that by cooperation of young and old, the moral standards of youths had been raised to higher levels.

By such weekly Bible study some realized the need of Christian evangelism and ventured into a mission program, but as of the 1950s the effort was mostly confined to evangelizing the Amish body itself. In the summer of 1952 David A. Miller preached the full Gospel to the Amish in Lancaster County, Pennsylvania, with the result that some of the con¬gregations there broke fellowship with the western Amish churches and completely closed the door to his teaching. In 1953 he preached every day for two weeks to the Amish in Holmes County, Ohio, in spite of severe opposition. In the winters of 1952-1954 he preached at the village of Pinecraft, near Sarasota, Florida, where many Amish from the north resort in their winter homes. With the intensification of this program it was hoped that the Amish would ultimately be revived and bear a living testimony to their risen Lord with their distinct way of life.