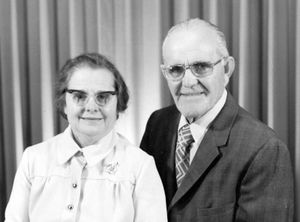 At the age of seven, Heinrich’s parents moved from the Kuban to Slavgorod, a grueling 4,500 kilometer journey. Here Heinrich’s father owned and operated a large mill that served both the government and local farmers; and was later appointed general manager of the local cooperative society, overseeing 42 regional stores. He also served as Deputy-Mayor of Slavgorod, a role that earned him wide respect, but which also cost him his life in 1922 when he was shot in the back by a young communist.

In 1924, Heinrich, along with his widowed mother and siblings, moved back to the Kuban, where fortuitously, his father had purchased a house. Heinrich and his two younger brothers took on masonry jobs in support of the family, and learned a trade that would be his mainstay for life.

In November 1930, Heinrich and his young family left the Soviet Union, arriving in Morden, Manitoba in February 1931. Apart from his younger sister, Erna, whom Heinrich sponsored in 1972, all other family members remained in the Soviet Union. Heinrich moved from Morden to Sardis, British Columbia within the year, living first on Adams Road, and then on 10 acres on South Sumas Road, where he was able to build a new house. In 1945, Heinrich and Olga decided to move to Abbotsford to have their children closer to the newly-established Mennonite Educational Institute. They bought 20 acres on Short Road, which was only a mile from the high school where Rita was already attending.

From the time of his arrival in Morden in 1931, Heinrich managed to find work that enabled him to support a family, and soon after, to purchase his first home in Sardis. From 1931 to 1956, Heinrich was primarily in the brick and stucco business, employing two crews. He built about 500 fireplaces in Chilliwack, did stucco and plaster jobs on about 700 houses, and did complete house constructions. He also did the stucco and plaster work on some churches, including East Chilliwack Mennonite Church, Greendale MB, First Mennonite Greendale, Yarrow MB, South Abbotsford MB, and Clearbrook MB, among others.

In addition to all his obligations to family, farm, and business as well as church, he was elected to the Building Committee of the newly proposed high school building - Mennonite Educational Institute. Heinrich was persuaded to oversee construction of the new school. He spent most of that year working for $2 per hour. Construction took place under a severely restricted budget, a poor selection of qualified tradesmen, and a highly accelerated completion date, as well as a shortage of building materials due to the war. The goal was to have occupancy by Christmas of that year; it was achieved. Heinrich remarked 25 years later, “Just what were we thinking?”

In 1956, Heinrich and his two sons, Henry and Bruno, established H. H. Muller & Sons. While Heinrich supervised the millwork shop on Short Road, and Bruno supervised the distribution of building materials, Henry was successfully bidding on construction jobs, which soon focused on school construction in the Caribou region of BC. Eventually, Henry would be declared British Columbia’s most prolific school builder, having built 200 schools.

Heinrich had grown up in a home with a strong musical heritage, which he would pass on to all his children. Consequently, his adult life of service in the church revolved around music. In total, he gave 27 years of service to church music ministry, both singing and leading children in song, in numerous churches: Morden, Greendale, South Abbotsford, Prince Rupert, and County Line churches. Many times, his entire family was called on to sing in church services.

In 1962, Heinrich and Olga moved to Prince Rupert, where he assumed the position of Federal Works Inspector for a period of three years. In 1965, they relocated to Abbotsford. Their new home had a room dedicated to Heinrich’s newest pursuit – masseuse. Heinrich declared that for some years the Lord had shown him how people could be healed through physical manipulation. He felt that he had the gift of touch in his hands and that by applying the right pressure in the right places, relief, even permanent healing, was possible. His clients were attracted to him by word-of-mouth.

In 1972, Heinrich and Olga joined the Clearbrook MB Church. The next year, MB Missions/Services asked Heinrich to oversee the construction of a church in Africa in the spring of 1974, giving him time to raise the necessary funds. He expected to have the funds by year’s end. However, the unexpected death of Olga that fall, and his own four months later, intervened.

Heinrich Muller is remembered as a man of compassion and integrity, a man with vision and character, and a man with a child-like trust in his heavenly Father.