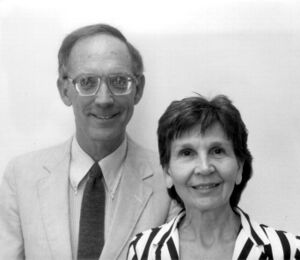 Ed grew up in Scottdale, Pennsylvania, where his father was General Manager of the Mennonite Publishing House. He thus had contact with many leaders in the Mennonite Church who visited his home. In 1948 Ed graduated from Eastern Mennonite High School. During his high school years, he participated in a summer project taking horses to war-torn Poland, a foretaste of his life's interests.

Ed Metzler attended Goshen College, where he earned a BA in 1953. While there, he became involved in the Peace Society and attracted to Gandhi's model of nonviolent action. He began seminary studies at Goshen Biblical Seminary. At Harold Bender's invitation, Ed and Ethel moved to Washington, D.C. where Ed become the Associate Executive Secretary of the National Service Board for Religious Objectors (NSBRO) from 1954-1956. This experience significantly broadened Ed's ecumenical perspectives. He finished his seminary work at Goshen and received a BD in 1957.

Ed and Ethel moved in 1957 to Kitchener, Ontario where he pastored at First Mennonite Church. He also helped to establish Rockway Mennonite Church. On 17 November 1959, he wrote an article in Gospel Herald that advocated nonregistration for the draft, an extremely controversial position at the time. In 1962 the family moved to Akron, Pennsylvania, where Ed became director of the Mennonite Central Committee Peace Section. During his tenure, Ed became a participant in the civil rights movement, sharing his beliefs with his children by taking them to protest marches in Lancaster, Pennsylvania, and Washington, D.C.

In 1967 Ed agreed to become the Program Director in Nepal for the Peace Corps. Ed and Ethel also worked in India (Kolkata), Thailand, and Iran, meeting complex situations with optimism and aplomb.

Ed and Ethel Metzler moved to Goshen, Indiana in 1974, and Ed taught Ethics and Political Science as a visiting professor at Goshen College, while Ethel started graduate studies in counseling. They became early members of Assembly Mennonite Church, hosting small groups and mentoring young adults. Ed served the church in multiple ways as Director of Addictions Services for Oaklawn Psychiatric Center, then as Director of Peace and Justice Concerns for the Mennonite Church, Director of Mennonite Board of Congregational Ministries, and Coordinator of New Call to Peacemaking (a cooperative effort of Historic Peace Churches). He chaired the first steering committee of Christian Peacemaker Teams (CPT).

From 1989 to 1998, Ed and Ethel returned to Kathmandu, Nepal as joint appointees of Mennonite Board of Missions and Mennonite Central Committee to the United Mission to Nepal (UMN). This agency's diverse development projects included community health, non-formal education for women, hospitals, and hydropower. As Executive Director, Ed provided leadership to a staff of more than 2,000 Nepalis and 400 expatriates from 30+ church-related agencies from more than 18 countries. From 1998 to 2003, Ed and Ethel Ed and Ethel returned to Akron, Pennsylvania, where Ed rejoined MCC as Director of International Programs. They then retired in Goshen.

Ed was a bridge builder; his diplomatic skills and good humor enabled him to bring people together to work toward common goals.