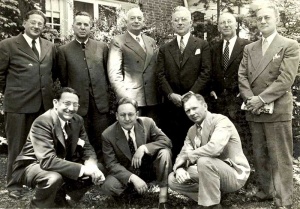 The National Service Board for Religious Objectors (NSBRO) was a voluntary association of religious organizations which acted as a voice for the churches and conscientious objectors to the Selective Service System in the United States in matters regarding the administration of the draft of conscientious objectors. It was created on 26 November 1940 as a merger of the short-lived National Council for Religious Objectors (NCRO) with the Civilian Service Board. The NCRO had been established on 11 October 1940 by joint action of the Mennonite Central Committee, the American Friends Service Committee, and the Brethren Service Committee. The NSBRO Board of Directors was composed of seven members, representative of the above three groups and the Fellowship of Reconciliation, the Commission on World Peace of the Methodist Church, the Disciples of Christ, and —from 1942—Walter van Kirk of the Department of International Justice and Goodwill of the Federal Council of Churches of Christ in America. The Fellowship of Reconciliation in 1944 withdrew its membership to become only a consultative member, and in 1946 the Friends ceased to be active, ultimately withdrawing their membership. From 1946 on the NSBRO was largely in the control of the Mennonites and Brethren. To enable other interested groups to share in the work of the NSBRO the Consultative Council was created by the Board of Directors on 16 April 1941. Ultimately 39 groups, largely denominational bodies, joined this Council.

The function of the NSBRO was to serve as the liaison between the churches and other groups having conscientious objectors to military service among their members. Although it did not administer any Civilian Public Service (CPS) projects or camps, it performed a valuable service. It was not the sole channel to the National Selective Service office for those groups who administered CPS, since they could and did on occasion deal directly with Selective Service, but it nevertheless carried most of the liaison work. For this purpose it was organized into the following sections: Camp Section, Complaint Section, and Assignment Section. The Camp Section worked in connection with the selection of sites for CPS camps; the Complaint Section helped men who were not properly classified or were denied their claim to conscientious objector status; the Assignment Section was the channel for transmitting the assignment to the proper CPS camp for the COs who were being drafted.

The NSBRO official publication was the Reporter, first issued as a monthly magazine in July 1942, then as a semimonthly from November 1942 to February 1946, and thereafter irregularly, usually as a four-page journal. Other mimeographed publications were the Camp Directors' Bulletin, which had reached issue No. 180 by June 1946, and the directors' General Letter to all CPS men, which was issued 164 times between December 1942 and August 1946. There were also numerous other bulletins and memoranda.

The first officers of the NSBRO Board of Directors were M. R. Zigler, chair; Orie O. Miller, vice-chair; Paul J. Furnas, treasurer; and Paul Comly French, executive secretary and director. French served until 1946. During most of this time J. N. Weaver, a Mennonite, was in charge of the Assignment Section. Additional members of the Board in the early days were Arthur L. Swift, Jr., Charles F. Boss, Jr., Walter W. van Kirk, and James A. Crain. With the. transfer of M. R. Zigler to Geneva, Switzerland, in 1952, Orie O. Miller became the chair and Harold Row, of the Brethren, vice-chair. Ora M. Huston served for a time as executive director after Paul C. French's withdrawal in 1946. He was succeeded by A. Stauffer Curry, and he in turn by Leroy Doty, all of the Brethren. The headquarters of the NSBRO was in Washington, D.C.

The work of the NSBRO was much reduced after the discontinuance of the CPS camp system, but the resumption of the draft of COs in 1950 made its continuance desirable. It continued to play a vital role as the liaison with the National Selective Service headquarters in Washington.

The budget of the NSBRO was supplied by regular appropriations from the three Historic Peace Church service agencies, by contributions from members of the Consultative Council, and by general contributions solicited by the NSBRO office, which for some years had the valued service of Leroy Dakin for this purpose.

In 1964 the name of NSBRO was changed to National Interreligious Service Board for Conscientious Objectors (NISBCO) and in 2000 it became the Center on Conscience & War.