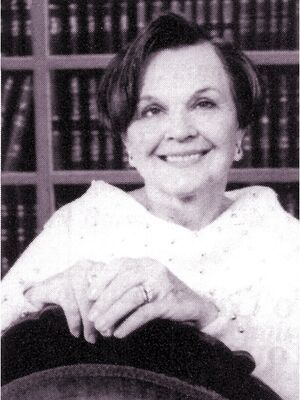 Helen Wilms Litz: musician and choir leader; born 7 June 1932 in Winnipeg, Manitoba, Canada to Edward (born 1900, Neu-Osterwick, Chortitza, South Russia) and Elizabeth (Neufeld) Wilms (born 1 May 1904, Kronsthal, Chortitza, South Russia). She was the fourth of five children in the family. Helen was baptized in Winnipeg on 7 September 1947. She married Albert Litz on 25 Aug 1951 in Winnipeg. The couple had three children. Helen studied music and education at the Manitoba Teachers College, the University of Manitoba, and the Royal Conservatory. For many years, she was the conductor of the Mennonite Children’s Choir and received many awards for her musical work. She died on 13 January 2021 in Winnipeg.

In her early years growing up in Winnipeg, Helen Wilms received an education at local schools. Following her basic studies, she attended the Manitoba Teachers College. She also took courses at the University of Manitoba, as well as vocal and theory studies through the Royal Conservatory and music lessons with Gladys Whitehead. Her areas of specialization were voice, violin, and piano. On 25 August 1951, she married Albert Litz at the North End Mennonite Brethren Church in Winnipeg. The couple had two sons and a daughter. One son, Reg, died in 2013.

One of Helen Litz’s major accomplishments was working with the Mennonite Children’s Choir, which she established in 1957 and led until 2008. The choir was comprised of approximately forty boys and girls aged eight to sixteen years old, singing a wide variety of songs from Baroque to contemporary. Together with the choir, Helen travelled around the world, giving concerts across Canada and the United States, as well as locations around South America, Poland, Austria, England, Wales, and elsewhere.

Under the leadership of Helen Litz, the Mennonite Children’s Choir won awards at local, national, and international music festivals. The group also helped support many philanthropic projects involving children. Helen also received recognition for her work in composing and arranging music, including an arrangement of the Prayer of St. Francis. She also arranged a version of Dona Nobis Pacem for the forty-fifth anniversary of the Mennonite Central Committee. Much of her music has reflected themes related to faith.

Over the years, Helen Litz and the Mennonite Children’s Choir made many musical recordings for the Canadian Broadcasting Corporation (CBC), the Canadian Talent Library, and elsewhere. She received many requests to serve as a guest conductor of various choirs, while also working as a choral clinician and adjudicator in settings such as churches, schools, festivals, workshops, and music camps.

In 2006, the Canadian Music Educators Association established the Helen Litz Award for Children’s Choirs in recognition of her accomplishments. On the choir’s behalf, she also received the Canada 125 award and was nominated for Woman of the Year in the Arts category.

In addition to her work as a conductor and composer, Helen Litz participated in singing with the Mennonite Festival Chorus, led by Robert Shaw and other conductors. Even into her 80s, she was still participating in the group. She was a member at the Portage Avenue Church in Winnipeg and was active in music there, leading choirs for special occasions such as Christmas and Easter. She died on 13 January 2021 in Winnipeg.

Helen Litz was a dedicated musician whose efforts helped enrich the lives and faith of many people. Through her work with the Mennonite Children’s Choir and other endeavours, she helped to enhance the musical traditions in her own community and far beyond.