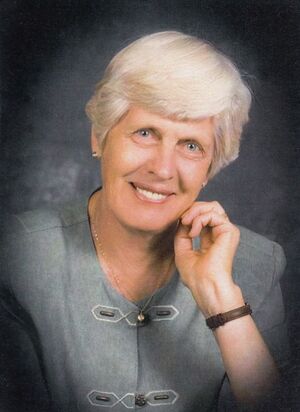 Helen and her family fled to Poland in fall 1943 and arrived in what later became East Germany in March 1945. Her father was drafted by the German army in 1942 and was not heard from again after 1943. After time spent mostly in Austria and then in refugee camps in Germany, the Mennonite Central Committee (MCC) helped Helen’s mother and her children immigrate to Canada in 1949.

Adjusting to a new life in Canada was a challenge for Helen, but she gained strength and courage from her faith, which remained strong her entire life. After high school, she attended Briercrest Bible College (Caronport, Saskatchewan) where she met William "Bill" Lescheid (1936-2019), whom she married in 1962.

Helen trained as a nurse at Vancouver General Hospital. In 1966, the family joined the African Inland Mission and spent a few years in a small village (Githumu) near Thika in Kenya, where Helen worked in a medical clinic as a nurse and Bill as teacher and headmaster for the local school. They returned to Canada in 1969, and settled near Abbotsford, British Columbia, where Helen’s mother lived. Here Helen began working part-time as a nurse at Menno Hospital/Home.

Encouraged by Bill to do something with her love of words, Helen began writing inspirational stories about people who faced some difficulty in their lives but managed to overcome it through their faith in God. She recognized this had happened in her personal history, and also the part MCC had played in her life; she edited and co-authored Footprints of Compassion: The Story of MCC-B.C. 1964-89 (published 1988). In 1999, she published her first sole-authored book, Lead, Kindly Light, the story of how her mother’s faith helped them escape the horrors of war to live a happy life in Canada. This book was followed by Treasures of Darkness, written after Bill suffered a serious mental breakdown and began spending most of his time in psychiatric institutions. Bill never fully recovered and remained severely mentally ill for the rest of his life. They divorced in 2001.

Lescheid published several books and numerous articles, some of which appeared in popular magazines such as Reader’s Digest and Guideposts. Many of her articles and some of her books were translated into different languages and published overseas. Helen remained humble and very approachable, always careful to attribute her success to God and her faith in Jesus Christ. In her middle age, she gave herself the name "Grace" explaining it was because "Helen found grace in the eyes of the Lord."

In her seventies Helen joined Toastmasters International, trained in public speaking, and began delivering motivational talks and selling her books. She continued her ministry through writing even after being diagnosed with breast cancer in 2011, and published another book, Prayer: When Answers Aren’t Enough, that same year.

Shortly after turning 80, she was involved in a serious car accident. She never fully recovered from her injuries and from 2017 experienced a rapid decline in health and loss of independence. Even then, she wrote and published a final book, Wonder, in 2019. Even in her continued state of physical decline, she still talked of ministering to and encouraging others in need around her!

Helen Lescheid saw her writing as an opportunity to help people in need and reach many people with the message of faith and hope.

Lescheid, Helen Grace. He Raised Me Up to Stand on Mountains. Belleville, ON: Essence Publishing, 2005.