The Mennonite Benevolent Society (MBS) was formed in 1953 in order “to erect, maintain and conduct homes for the aged, or invalids, or orphan-asylum, etc.” or, according to their initial constitution and by-Laws published on 27 May 1953: “The objects for which the Society is formed are to provide a haven and asylum and supervised care for the aged and infirm.” Its spiritual context was quickly established with the defining of the mandate of its first structure and program, the Menno Home, completed in 1954 in Abbotsford, British Columbia, as “providing a comfortable home for the elderly, free from cares and labour, where they can prepare themselves for eternity.”

The first AGM was held on 19 September 1953, with 29 people attending. An early order of business for the board was to establish a strong membership base, and although the founding directors were all from the same denomination (Conference of Mennonites in BC), word was immediately spread that all Mennonites were not only welcome, but were to be solicited whenever possible. It took many years to build up the membership roll, but by the year 2000 it had stabilized near the 650-member mark. Five congregations also took out memberships in the first decade, mainly as an encouragement and affirmation of this ministry to the people in their midst.

MBS lifetime membership fees have remained unchanged from the initial $50.00, which was an important revenue source in the early years but merely a token today. However, for future construction plans to be implemented, the membership is encouraged to make substantial donations. It is the membership’s mandate to elect members to the board and to make decisions concerning major projects proposed by the board. Although spouses of Menno Home and Hospital residents have priority in admission to the housing units on site, MBS members are next in line to apply. Beyond this, any vacant units are made open to the community at large.

Although only four and a half acres (1.82 hectares) were purchased originally, fourteen adjacent parcels of various sizes were acquired over the years, giving their property a total size of 11 acres (4.45 hectares) in 2008. Fortunately, most additional properties purchased had houses on them, so administrators and some other staff persons could be housed without further construction costs. An innovation in the 1950s was to encourage prospective residents to construct their own cottage on the grounds, but only a few took advantage of that initiative. By 1976 staff were no longer lodged on site, although a few did rent houses on newly-acquired land parcels until these were slated for demolition.

Initially the 26-bed Menno Home was classified as a boarding home for aging and frail persons who could fend for themselves in most situations but wanted their nutritional needs met; however, those contracting age-related illnesses had to be sent back into their homes (if they still had such) when they could least cope on their own. Five rooms were therefore renovated to house those too ill to care for themselves but not warranting public hospital admission. 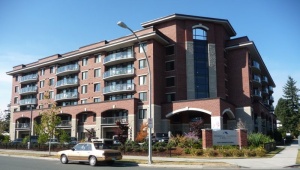 Then in 1960 MBS completed a 36-bed hospital building (called Menno Private Hospital at the time, but eventually changed to Menno Hospital). Along with additional beds being added to both the Home and the Hospital over the decades, chapels were constructed for each of them, in 1967 and 1978, respectively. The next move was to build 26 self-contained units geared to “independent living,” which opened to residents in 1982 as Pauls Pavilion. In 1992 this building was incorporated into a 60-bed addition named Menno Pavilion. While the Home and Hospital grew apace, Menno Terrace West (1998), Menno Terrace East (2005), and Primrose Gardens (2010) were erected for additional “independent living” space. The 2012 capacity of Menno Home is 196 beds, Menno Hospital has 151 and Menno Housing (the new name covering Menno Pavilion, Menno Terrace West, Menno Terrace East, and Primrose Gardens) has 318 units. All these buildings and programs are now operated under the name of Menno Place.

As of 2008, Ed Janzen is Chairman of the Board of MBS, which has appointed Arthur J. Enns as Chief Executive Officer (CEO) of Menno Place. Dr. Robert Turnbull is the Chief Operating Officer (COO) of Menno Hospital and Menno Home, while Kim Hiebert is the COO of Menno Housing. Kathrin McMath is the Chief Financial Officer (CFO) for Menno Place and its Senior Chaplain is Rev. David Dick.

Levels of care have changed over the decades, to where there is little difference between the Home and the Hospital, with both providing “complex care,” although the Home has two floors specifically for those with dementia, and the Hospital has a number of wards fitted with overhead patient lifts. Meanwhile, Housing has a mix of “independent living,” “assisted living” and “supportive housing.”

In 1968 the Hospital staff requested union certification, which resulted in both the Hospital Employees Union (HEU) and the British Columbia Nurses Union (BCNU) having the privilege of negotiating pay increases and working conditions on their behalf. Twenty years later the Home staff formed the Menno Home Staff Association. The Housing staff are not aligned with any of these organizations.

Capital costs for the first building in 1954 received a one-third subsidy from the provincial government. Eventually government monies covered most new Home and Hospital construction except for the chapels and all Menno Housing units, which have been kept free of government money--and intervention. However, in more recent years all capital costs have become the responsibility of MBS, with government funds, provided through the Fraser Health Authority (FHA), restricted to assisting in operating costs. The 2008 book value of Menno Place land and buildings is approximately $27 million, while its combined annual budget is similar. The FHA subsidizes the operating costs with an $18 million annual grant.

The 2008 statements of Vision, Mission, Commitment and Direction are: