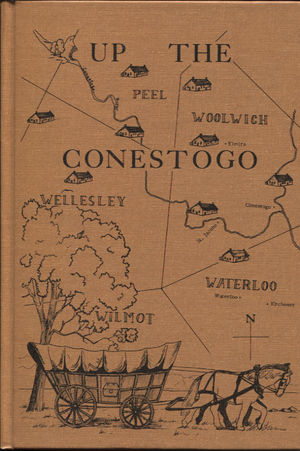 Isaac Horst grew up on a farm, and attended the public school system in his Mennonite community until the age of 14. He enjoyed reading from early in his school years. He was not physically strong, and was unable to perform some of the heavier manual labor on the family farm. After his 1943 marriage to Selina, Isaac took up market gardening on a small property purchased from his grandfather, though with limited success. For the following 25 years Isaac alternated between jobs at Snyder Flour Milling in St. Jacobs, Ontario, further attempts at farming, odd jobs off the farm, and two years of teaching at the Balsam Grove school within the Old Order Mennonite parochial school system that began in the 1960s.

In the mid 1960s Isaac and Selina Horst, with several other families, purchased farms in the Mount Forest, Ontario area, though for various reasons they did not move there until 1968. This was the first successful effort among the Ontario Old Order Mennonites to establish a daughter community geographically separate from the Waterloo County community. By 2002 there were 180 Old Order families in the Mount Forest settlement.

After retirement from farming, Isaac worked 10 years wrecking buildings for salvage; a business that was more remunerative than any of his earlier vocations. He also pursued his love of reading by taking correspondence courses in English literature.

Isaac then began a new vocation in translating texts from German to English, and in writing about Ontario Old Order Mennonite life and history. All of his early works were self-published, some of them issued as mimeographed sheets in three-hole binders.

His first substantial work was Up the Conestogo, self-published in 1979. It was a 450-page story of Old Order Mennonites in Ontario, combining family history and creative non-fiction enactments of events based on diaries, news accounts and oral history. It is illustrated with maps and pictures, many of them by Horst himself. It is not “history,” but rather is a variety of accounts of Old Order families and places.

Horst’s most useful historical text was Close Ups of the Great Awakening (1985), a detailed historical account of divisions within the Ontario Mennonite community in the 19th century, based on letters, diaries and official documents of the era. Especially useful are lengthy quotes from translations of German-language sources otherwise virtually unavailable, and Horst’s interpretation from an Old Order perspective of the impact of 19th century Pietism and revivalism on the Ontario Mennonite community.

Over the years Isaac Horst became comfortable speaking to outsiders wanting to learn more about Old Order Mennonites. He often spoke to Mennonite Studies classes at the University of Waterloo, and to Elderhostel groups. He wrote a column, “Old Order Voice,” in the Mennonite Reporter from 1989-1997 as well as a number of articles for Mennogespräch, the historical bulletin of the Mennonite Historical Society of Ontario.

Perhaps Isaac R. Horst’s most lasting contribution was through his translations from German to English of handwritten letters and documents, many of them in the gothic script. His familiarity with Mennonite religious terminology, and his encyclopedic knowledge of Mennonite family relationships in Ontario gave him insights that translators external to the community would not have had. His translations included 1600 letters from the Jacob Mensch collection--letters written to a conservative Mennonite leader in Pennsylvania in the 19th century. He also translated 300 or more hymns for Wilmer Swope, and worked on various “Pennsylvania Dutch” dictionary projects. His translation work combined the need for a small source of income with a love for delving deeply into his Mennonite heritage.

Isaac Horst had a self-effacing wit, an engaging extroverted personality, and a desire to better understand the people and world around him. For a time he may have been the best-known, and most read, Old Order Mennonite in North America.

Listen to a 4:34 minute talk by Horst about Old Order Mennonite interaction with the Ontario government. As a columnist for the Mennonite Reporter he was present at a dinner and anniversary program celebrated in late 1991.

Disclosure of the persecutions against Daniel Hoch, preacher of the Mennonite Church in Upper Canada [translation and commentary]. Mimeographed, 1982.

The man who could do anything : the story of Simeon Bowman. Self-published, 1983.

Thou art Peter : a story of the pioneer Peter Martin and the Woolwich Mennonites. Self-published, 1983.

Discussions of the preachers and deacons of the Mennonite parishes in the County of Waterloo containing the resolutions passed at the semi-annual conferences [translation and commentary]. Mimeographed. 1984.