The Mennonite Historical Society of Ontario (MHSO) held its first meeting on 8 May 1965 with 35 persons in attendance. Orland Gingerich gave a presentation on the reasons to form an historical society, and Conrad Grebel College President, J. Winfield Fretz, led a discussion on possible organizational approaches. The option of a society closely related to the College received the most favor. 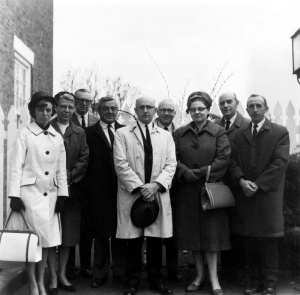 The Society has generally held two public meetings per year, sometimes in combination with bus trips to historical sites in Southern Ontario. The initial bus trip was to Vineland, Ontario. A longer bus trip to Pennsylvania was sponsored in 1983. The Society has also helped to sponsor a variety of dramatic presentations. A centennial pageant, "The New Commandment" by Barbara Coffman was performed in 1967. A stage play, adapted by Norma Rudy from Mabel Dunham's Trail of the Conestoga, was mounted three times (1969, 1970, 1973) and a film of the play was released in 1977. Two shorter film productions were "And When Their Time had Come" (a 45 minute  dramatic documentary filmed in 1971 about the Mennonite experience in Russia and subsequent emigration to Canada in the 1920s) and "Beyond This Land" (a 42 minute Amish Sesquicentennial historical pageant produced by the Mennonite Historical Society of Ontario presented in the Stratford Festival Theatre in 1972-1973, based on a script by Urie Bender).

The MHSO also played a key role in the preservation of two historical buildings:

Lorna Bergey served as secretary of MHSO from 1968-2000, and was a board member for 37 years. She was the "engine" that provided organizational energy during her years of service.

Ontario Mennonite History 18 (November 2000). (This issue contained a number of articles related to the 35th anniversary of the Society.)

The Mennonites in Ontario by J. Winfield Fretz (1967)

The Mennonites in Ontario by J. Winfield Fretz (1974)

The Mennonites in Ontario by J. Winfield Fretz (1982)

Mennonites in Ontario by Marlene Epp (1994)

Mennonites in Ontario by Marlene Epp (2002)

Mennonites in Ontario by Marlene Epp (2012)

A Brief History of Mennonites in Ontario by L. J. Burkholder (1986 reprint of 1935 original)