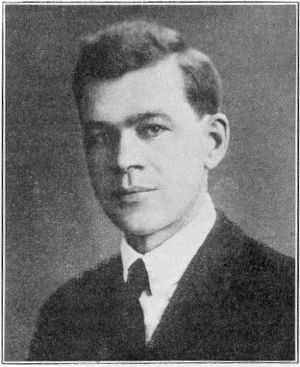 Dietrich R. Hoeppner. Photo from Feeding the Hungry by Hiebert and Miller, p. 352

Dietrich’s great-great-grandfather was Jacob Höppner (1748-1826), who was one of the two delegates who led Mennonite immigrants to Russia in 1787. His parents emigrated from Russia to Canada and then in 1884 to Kansas. In 1885, they joined the Church of God in Christ, Mennonite. His father established a clock- and watchmaking business in Hillsboro. Dietrich attended the Gnadenau school near Hillsboro and completed eighth grade and worked in his father’s business.

After Dietrich’s parents moved to Winton, California, in 1912, he and his brother Jacob took over the family business and expanded its products to include jewelry, china, and other fine products. Although he did not attend Tabor College, he studied privately under Tabor professors Jacob Ewert and Peter C. Hiebert. In 1917-1918 Dietrich attended the Needles Institute of Optometry in Kansas City, Missouri, and received a diploma in Doctor of Optometry Science.

In May 1918, Hoeppner was drafted into the US army at Fort Riley, Kansas. In November 1918, he joined the American Friends Reconstruction Unit and departed for France, where he spent a year doing relief work with the Quakers. After relocating to Switzerland for health reasons in 1920, he conducted child relief work with the Quakers and then the Mennonite Emergency Relief Committee (MERC). He was appointed a field supervisor for MERC to organize relief efforts in Austria, Germany, Poland, and the Netherlands during 1920-1922. On 5 October 1921, he was baptized into the Mennonite Brethren church in Deutsch-Wymysle, Poland.

In January 1922, the Russian government gave the Mennonite Central Committee permission to conduct relief activities; and Hoeppner was assigned to work as the MCC representative under the American Relief Administration in the Volga region. Hoeppner worked in the large Mennonite colony at Orenburg as well as the non-Mennonite regions of the Volga. He organized the distribution of food supplies, medical relief, horses, and tractors. He contracted severe malaria during this time. By August 1924, the crisis in Orenburg had passed; so MCC withdrew Hoeppner from Russia and began to close down its Russia operations.

After leaving Russia, Hoeppner studied optics at the world-class, Carl Zeiss AG-sponsored Staatliche-Optiker-Schule in Jena, Germany, from April 1925 to May 1926. He arrived back in Hillsboro in December 1926, and opened a new optometric office. He continued to see patients and to make glasses into the early 1960s.

In about 1964, Dietrich Hoeppner suffered a heart attack from which he never recovered. He died suddenly on 10 January 1965, at the age of 75, and was buried in the Hillsboro Mennonite Brethren Cemetery with the inscription on his tombstone, “For me to live is Christ and to die is gain.” His life of service in international relief and providing accurate timekeeping and better vision to the people of Hillsboro demonstrated a life lived for Christ.

Warkentin, A. and Melvin Gingerich, compilers. Who's Who Among the Mennonites. North Newton, KS: Bethel College, 1943: 113.