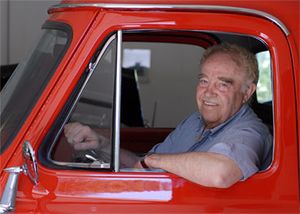 Jake moved to British Columbia (BC) as a young child with his parents in 1936. His parents established a farm on land that is now the Abbotsford Airport. This property was expropriated by the Canadian federal government in 1941 to serve as a training base for World War II pilots.

Jake launched his life-long vocation in the poultry industry in 1953, purchasing his first farm, and in 1956 he became manager of Funk’s Feeds in Yarrow, in which he also held shares. In 1964, he, along with two of his brothers, bought shares in the new mill, Clearbrook Grain and Milling, relocated to Abbotsford from Yarrow. Over the next several decades, Jake increased his poultry business, adding breeding stock to his egg-producing business. Jake came to be highly respected throughout the provincial egg producing industry. He sat on both the Egg Marketing Board and the Egg Producers’ Association Board, where he and brother, Peter, played key roles in improving this industry. In 1988, Jake, along with a partner, bought into the hatchery business, establishing Pacific Pride Chicks in Abbotsford, and shortly thereafter, Jake purchased two hatchery and breeding franchises in Oregon. In addition, Jake owned the only turkey breeding business west of Winnipeg, but sold that following the Avian Flu outbreak.

By the late 1990s Jake had become the sole shareholder in Clearbrook Grain and Milling. Today it is BC’s largest and oldest family-owned and operated feed mill and is the cornerstone of the Friesen Group of Companies, which has over 100 employees. It operates two feed mills (dairy & poultry), a premix plant, retail store, laying hen hatchery, and seven farms producing table eggs, hatching eggs, and broilers. Following Jake’s passing, the company’s ownership and direction passed to his children.

Jake became equally invested in church and community interests. He served as moderator of the South Abbotsford Mennonite Brethren Church for several years. He also loved to sing, and sang bass in a male quartet, of which recordings were made. Jake served on the Mennonite Educational Institute (MEI) board for almost ten years, including the position of chair during a critical time when the school nearly closed due to severe financial challenges. During that time, he also sat on the Federation of Independent Schools Association Executive. He was part of the executive that convinced the provincial government, in 1977, to grant funding for independent schools in British Columbia. This funding provided critical financial support for independent schools across the province, enabling schools like MEI to grow and excel.

In recent years, Jake served on the board of the Mennonite Faith and Learning Society, where he advocated for the present partnership with the University of the Fraser Valley. As a result of his support, he was presented with an Honourary Doctorate from UFV. Jake and Erna enjoyed the Arts and were major patrons of the Valley Concert Society. Jake’s generosity extended also to assisting young farmers in becoming established. In private life, Jake enjoyed his antique car and tractor collections, meeting weekly with like-minded friends to work on the vehicles.

In his quiet way, Jake Friesen showed determination and dedication to his commitments. He was generous not only with his resources, but also with his time, taking on a number of diverse voluntary positions and offering his knowledge and leadership expertise in a variety of arenas, from his business world to his church community. Jake will be remembered not only for his accomplishments, but "more importantly for how he did it: with humility, honesty and hard work."