During the decade of the 1930s Mennonite immigrants were building the new community of Yarrow in British Columbia (BC), Canada. Among the newly arriving immigrants was Cornelius C. Funk (1893-1985), who with his father and several business partners had operated a flour mill in the Russian settlement of Memrik. The use of French grinding stones in this mill allowed for the production of excellent ground flour. 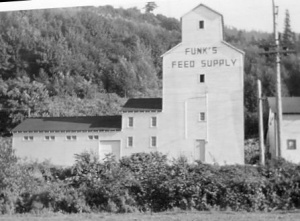 These business experiences in Russia fueled a dream for Funk to establish a similar operation in his new homeland. After several years of less than satisfactory farming efforts in Yarrow, Cornelius purchased an electric motor and a hammer mill from a Yarrow business man in the fall of 1940. Then with the acquisition of some building materials from lumberman Jake Derksen, Funk was able to build a modest feed mill.

With his first purchase of two tons of grain from Sumas Prairie farmer Alex Hougan, he was able to resume milling again. Cornelius delivered the first sacks of milled grain to his customers on his bicycle, and at a loss. However, he was not discouraged. As the business grew, Funk acquired a feed mixer, and formulas for combining various grains, thus able to supply the needs of local dairy farmers.

From the outset, Cornelius involved his children in the business. Corney (1921-1999) became involved in the mill. Henry (1924-2007) was given responsibility to manage the grocery store. Arthur would come to manage the meat department. Daughter Annie worked as the company book-keeper from 1948 to 1953. While the other daughters were not officially part of the business, they provided financial assistance in the early years of operation, and later became share holders in the business.

To facilitate the increasing volume of grains he needed for his mill, Cornelius decided to build an elevator next to a railway siding at Majuba Hill in Yarrow. However, owing to World War II, construction permits were difficult to come by. A personal visit to Dal Grauer, the president of BC Electric Railway Company in Vancouver, BC quickly secured official permission to complete this structure.

Yarrow carpenter George Sawatsky was hired to begin construction of the elevator shortly after 1 January 1941. After another personal appeal to Mr. Grauer, the BC Electric Company agreed to assume costs for building a railway siding, linking the mill to the main BC Electric tracks.

With the rapid expansion of the milling business, Cornelius purchased a lot on Main Street in Yarrow on which he constructed a store to facilitate selling and distributing the feed. The combination of the elevator next to the railway and the commercial outlet in the community of Yarrow worked well. “I realized that I had found exactly the right kind of work I enjoyed doing.” The Yarrow Central Road location became the grocery outlet for Yarrow residents and offered a meat market, cold storage locker for community use as well as a sausage smoking operation. 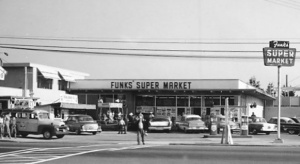 By the early 1940s the population in the Clearbrook and Abbotsford areas was rapidly expanding with the development of numerous large dairy and chicken farms. Sensing expanding opportunities, the Funks decided that establishing a business presence in this community would be desirable. When in June 1964 the Yarrow mill was destroyed by fire, Cornelius seized this opportunity to relocate the business to Abbotsford, which in 1967 was incorporated as the Clearbrook Grain and Milling Company.

The operation in Abbotsford rapidly prospered. As the new milling center for their base of business, production capacity exceeded the operation in Yarrow by a factor of ten. The Funks sold the milling business in 2000.

In 1955 the family decided to open Funk’s Grocery Store in Clearbrook at the corner of Clearbrook Road and South Fraserway, which was then the old Trans Canada Highway. Three years later a new store was built on this property, and in 1967 the sausage operation moved from Yarrow to Clearbrook. The business became known for its sausages, cooked spare ribs and other specialties. Local hunters could bring their game to be dressed and prepared for cold storage. Many Clearbrook residents appreciated the home delivery services and ethnic baking supplies which for years were Christmas staples for the community.

It was the practice of Funk to assemble his dozen or so employees on the first working day of each new year and begin with a Scripture reading and prayer. Although the Yarrow grocery store ceased operation in the early 1970s, local residents expressed their appreciation to Cornelius Funk with the presentation of a citation which read: “Presented to C. C. Funk in recognition and appreciation for your services to the Community of Yarrow. Yarrow Days 1983.”

The store in Clearbrook was sold in 2008, thus concluding a business that had been in the Funk family for four generations.