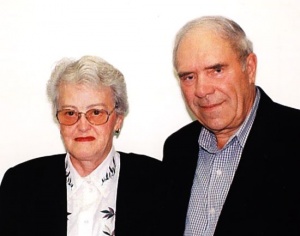 Peter immigrated as a young child with his parents to Canada in 1926. In 1936 Peter’s parents established a farm on land that is now the Abbotsford Airport. This property was expropriated by the Canadian federal government in 1941 to serve as a training base for World War II pilots. Although the Friesens were promised a fair settlement, they never were compensated for their loss.

Peter did not have the opportunities for advanced studies. As a child he attended the Peardonville Elementary School for seven years, and one further year at the newly formed Mennonite Educational Institute. The remainder of his education he derived from correspondence courses and night school.

Peter felt that his life calling was to be a farmer. After World War II, he purchased a farm on Huntingdon Road in Abbotsford. As a wedding present his in-laws gave the bridal couple a cow. This was the beginning of what would become a thriving dairy enterprise. In 1953 Peter purchased his first Holstein heifer from the Reid family in Matsqui, British Columbia. From this modest beginning, the Friesens established a distinguished herd of Holsteins, operating under the name of Alder Vista Farms, Ltd. Peter’s herd won several awards for its volume of milk production.

For a period of time Peter hosted a weekly Farm Radio Forum in his own home that was broadcast over the Abbotsford radio station. The half hour programs offered information and advice on all manner of agricultural issues, usually followed by a discussion involving their neighbours or invited guests.

During his farming career, Peter served on numerous community boards. His first election was as Secretary of the Peardonville local of the Fraser Valley Milk Producer’s Cooperative Association (FVMPCA). Later he was invited to join the board of the FVMPCA, where he served in a variety of capacities. On 14 July 1982 he was elected as the President of this association. He retired from board duties in 1990.

Beyond the FVMPCA Peter became a director of the Dairy Productions Promotional Fund Committee, a member and chairman of the British Columbia Dairy Foundation, a member of the Board of Dairy Farmers of Canada, and served as a director of the Dairy Bureau of Canada. Peter was also active in the Abbotsford Chamber of Commerce, where for nine years he served as Chair of the Agriculture Committee.

Peter also built up a thriving chicken business. He was one of the founders and first Director of the British Columbia Egg Marketing Board. He also served as Chairman of the Egg Producers Council.

By the time of his retirement in 1990 his contribution to agriculture was recognized both provincially and federally.

All his farming and community work notwithstanding, Peter was a loyal churchman, active in the ministry to seniors at the South Abbotsford Mennonite Brethren Church, which was his spiritual home. He also served this church as Church Council Chair for many years.