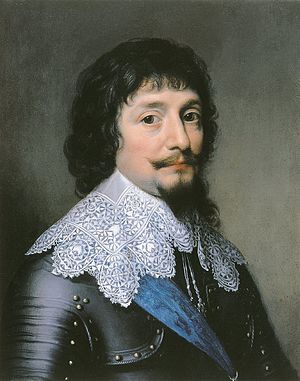 Friedrich V (Frederick): Elector Palatine of the Rhine (Kurfürst von der Pfalz), 1610-1623; born 16 August 1596. He was the son of Friedrich IV, Elector Palatine, whom he succeeded in 1610, and Louise Juliana of Nassau. Friedrich married Elizabeth (19 August 1596 – 13 February 1662), the daughter of James I, King of England, in 1613. This connection with England was intended to strengthen the Protestant cause in Germany. She was received in the Palatinate with great pomp and grand display and exuberant merrymaking.

In 1619 the Protestant estates of Bohemia rebelled against Holy Roman Emperor Ferdinand II and offered the crown of Bohemia to Friedrich. He was selected due to his position of influence in the Protestant Union, and was crowned as King Frederick I of Bohemia. This act is frequently cited as the final act leading to the outbreak of the Thirty Years’ War. After a year, Friedrich lost not only the throne of Bohemia but his domains in the Palatinate as well (Friedrich was known as the "the Winter King" due to the brevity of his reign). The Thirty Years’ War brought incomparable suffering upon the German people, especially those in the Palatinate, and the last remnants of the Anabaptists in the Palatinate were nearly or perhaps entirely wiped out.

Friedrich fled to Holland in 1622 and was formally deprived of the Palatinate in 1623. Friedrich died 29 November 1632 in Mainz after spending most of his exile at The Hague. The Palatinate was restored to his son Karl I Ludwig in 1648.