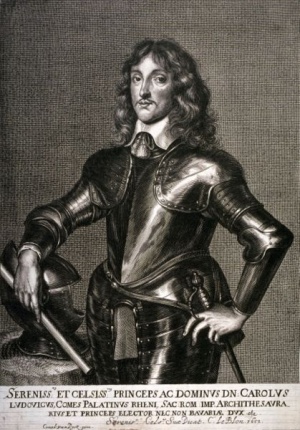 Karl I Ludwig (Charles Louis), Elector Palatine of the Rhine (Kurfürst von der Pfalz), 1648-1680, born 22 December 1617, the second son of Elector Friedrich V. His father had been formally deprived of the Palatinate in 1623 and Karl Ludwig spent a number of years in exile at the court of his uncle, King Charles I of England. The Peace of Westphalia restored the Lower Palatinate to Karl Ludwig in 1648, and following the execution of Charles I, he returned to the Palatinate in the autumn of 1649.

Karl Ludwig gave much attention to the problem of rebuilding the lands of the Palatinate devastated by the Thirty Years' War. For this purpose he admitted Mennonites coming from the Netherlands or expelled from Switzerland. Utilitarian  considerations outweighed religious scruples. For a long time the Mennonites in the Palatinate were not granted religious freedom "as a dangerous and refractory sect." Repeated heavy fines were levied upon them as a penalty for holding "secret meetings"; they must refrain from meeting secretly or be expelled. On 14 August 1661 they begged permission to hold their meetings quietly, but were refused. They should understand that they had never been permitted free exercitium religionis, because it was contrary to the imperial "recesses," but every time they meet a fine should be imposed on each person (30 April 1664). But on 4 August 1664 a significant general "Concession" was made, probably initiated by the Elector himself. A letter from the King of England and the intervention of influential Quakers may have led him to this decision (German text in Mennonite Lexicon II, 461 f.).

Karl Ludwig, who opposed the spirit of intolerance in his country and was interested in a union of the churches, continued his benevolence to the Mennonites and protected them from the attempts of his officials to suppress them. In Mannheim he permitted them to build a chapel at the Rheintor, likewise he allowed also the Hutterian Brethren to build a Bruderhof in this city with a large plot of land of their own.

Karl Ludwig has a place of grateful remembrance among the Mennonites. They liked to recall his paternalistic benevolence. The incident Antje Brons relates (Ursprung, 203), taken from folk stories, is characteristic: One day, riding through the countryside, the thriving farm of a Mennonite in the Pfrimm Valley caught his eye; he was told that on this farm things were not all aboveboard, for the farmer was a counterfeiter. The Elector requested that the farmer show him his counterfeiting mint, whereupon he showed the Elector his calloused hands, with which he had, with God's blessing, found the money in his fields. "If that is the way it is," said the Elector, "may your coin remain." He told the farmer to teach his children this method of minting, to their welfare and that of the entire country.

Karl Ludwig died 28 August 1680 and was succeeded by his son Karl II (1651-1685). Upon his death the Palatinate passed from Protestant to Catholic control under the rule of Karl Ludwig's distant cousin Philipp Wilhelm (1615-1690) and Philipp Wilhelm's son, Johann Wilhelm.