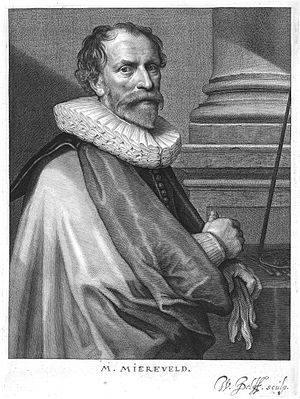 Michiel Janszn van Mierevelt (Miereveldt), (1567-1641), a noted Dutch portraitist, lived all his life in Delft and painted many pictures of the princes and princesses of the house of Orange-Nassau, also of Elector Friedrich V of the Palatinate, the dethroned king of Bohemia. Many of the pictures painted by his pupils in his studio were signed by him; this practice had a depreciating effect on his reputation as well as on the value of his paintings. The portrait of Lubbert Gerritsz, a Mennonite preacher, which is in the national museum at Amsterdam, is the product of a pupil (Cat. 1907, No. 1606). But the best made by him in person are of great artistic value. After unremitting work he left a fortune at his death and a respected school of portraitists, of whom Paulus Moreelse and Jan van Ravesteyn were the most outstanding. His son-in-law, the excellent copper etcher Willem Jacobszn Delff, made some excellent reproductions of van Mierevelt's works.

In foreign countries Mierevelt also enjoyed great fame. The court of England invited him to come to London; he was, however, unable to go because of the epidemic of the plague prevalent in the city. Duke Albertus of Austria, Stadholder of the southern Netherlands where the Anabaptists had been so terribly persecuted, called him to Brussels, and he was granted the very unusual privilege of practicing his "Mennonite religion" undisturbed, as the historian Joachim van Sandrart reports. The poet Joachim Oudaen, who was closely associated with Mennonites and Collegiants, composed his epitaph. Of his contacts with the Mennonites nothing is known but the fact that he was a member of the Mennonite Church. About 1600 there was at Delft a Flemish, a Frisian, and possibly a Waterlander Mennonite congregation. His father, Jan Michielsen Mierevelt (1528-92), a silver smith and copperplate engraver at Delft, is also said to have been a Mennonite.