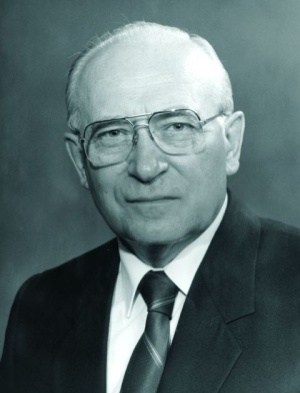 The chaotic aftermath of the Bolshevik Revolution prompted David’s parents to leave the Soviet Union in October 1926. In Canada they eventually settled on a farmstead near Coaldale, Alberta. In his youth David was exposed to a large and active Mennonite Brethren community in Coaldale in which he heard some of the most gifted and compelling Mennonite Brethren preachers at the time. The strong and repeated emphasis on conversion, on holy living, and the imminence of the second coming of Christ, left its mark: lacking clarity and assurance, as a young boy of 12, David, together with his brother John, approached their parents one night to settle questions concerning their salvation.

In 1938 at the age of 16, David enrolled at Coaldale Bible School where he spent three winters (1939-1942). Here he was inspired by teachers such as Abram Schierling, Jacob H. Quiring, and John A. Toews, whose well-organized lectures and expressive, winsome manner left an indelible impression on the young student. Bernhard W. Sawatsky in particular became a significant mentor. Affirmed and encouraged by his teachers to develop his gifts, Ewert embarked on an educational journey that continued for almost three decades. The next educational steps included Winkler Bible School (1942-1943) and Prairie Bible Institute (1943-1944). Both schools nurtured Ewert’s love for learning, and introduced him to a larger network of Mennonite Brethren, and evangelical Protestant, Christians. Ewert was part of a generation that began working and living in more urban centers, that pursued opportunities in higher education, and that was interested in doing evangelistic outreach and church-planting.

Ewert’s lengthy career as a Bible teacher and preacher began at the La Glace Bible School with short teaching assignments during the winters of 1944-45 and 1945-46. Coinciding with his appointment in La Glace was his marriage to Lena Hamm on 12 October 1944. Other teaching opportunities soon followed, first at Bethany Bible Institute (1946-1947) and then Coaldale Bible Institute (1948-1951), where he was also appointed principal. His public reputation as a promising leader within the denomination led both to his ordination at Coaldale in 1949, and an invitation in the early 1950s to join the faculty of Mennonite Brethren Bible College (MBBC) in Winnipeg, which became the primary locus of his ministry for the next nineteen years.

The challenges of classroom teaching intensified a desire for further theological education. In 1947, he began working towards a BA at the University of British Columbia. This was followed by graduate degrees from Central Baptist Seminary in Toronto (Bachelor of Divinity) in 1953, Wheaton College (Master of Arts) in 1956, and Luther Theological Seminary in St. Paul (Master of Theology) in 1961. In 1969 he completed his Ph.D. degree in New Testament studies at McGill University in Montreal.

Adding more responsibility to the already hectic pace of Ewert’s life during his time at MBBC (and after), were the various leadership roles he assumed within the denomination. In 1967 he was elected moderator of the Canadian Conference of Mennonite Brethren Churches. In 1970 he became a part of the General Conference Board of Reference and Counsel, a body on which he served for two decades, and through which he exercised considerable influence in shaping the theological direction of the denomination.

Attracted by the prospect of working with Myron Augsburger and George Brunk, Ewert decided in 1972 to join the faculty of Eastern Mennonite Seminary in Harrisonburg, Virginia, a school operated by the Mennonite Church. The experience broadened his understanding of the Mennonite constituency, particularly in the United States. When in 1975 the Canadian Mennonite Brethren Conference officially became a sponsor of Mennonite Brethren Biblical Seminary (MBBS) in Fresno, Ewert agreed to join the faculty of MBBS. In 1982 Ewert decided to return to Winnipeg to become the president of MBBC. He retired in 1988.

David Ewert will also be remembered for a publishing legacy. It began with articles in denominational magazines such as The Voice, the official journal of MBBC, the Mennonite Brethren Herald, The Christian Leader, and Direction. At the request of Conference boards/committees, he published several short booklets offering guidance to a broader audience on subjects such as Christian ethics and understanding the Bible.

Modestly successful as a college textbook was From Ancient Tablets to Modern Translations: A General Introduction to the Bible (Zondervan, 1986). Other books such as The Church in a Pagan Society: Studies in 1 Corinthians, and How to Understand the Bible, are either detailed expository studies or handbooks intended for use by students and pastors in their teaching and preaching ministries. Following his retirement he completed numerous book projects, some of them autobiographical.