From GAMEO
This is the stable version, checked on 4 January 2017. 1 pending change awaits review.
Jump to navigation Jump to search 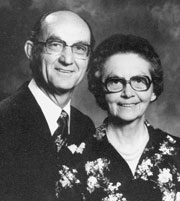 Jake grew up on his parents' farm near Dalmeny, Saskatchewan. Through the influence of godly parents and the teaching he received in the local Mennonite Brethren church, he was led to commit his life to Christ at the age of nine. Shortly after, he was baptized and became a member of the Dalmeny congregation. He was still quite young when he was asked to teach Sunday school classes and, at age 15, he preached his first sermon.

As a youth Jake's dream was to be a farmer and to serve the church gratis part time as pastor and teacher. The call to full-time service became louder, however, when members of his congregation encouraged him to devote all his energies and gifts to church ministries. He spent two years in the Tabor Bible School in Dalmeny, and then attended the Winkler Bible School for three years.

It was while he was a student in Winkler that he fell in love with Annie Enns. Before they married, Quiring received an invitation to teach in the Coaldale Bible School in Alberta. Although he was only in his early twenties he won the respect of the students and the Alberta churches. He carried a heavy teaching load, but there was always time for a letter to his beloved Annie. After a year of teaching Jacob and Annie were married. Quiring taught in Bible schools for eight years, first at the Coaldale Bible School (1936-1939) and then in Dalmeny at the Tabor Bible School (1941-1944), where he also served as president. While in Dalmeny the church ordained him to the ministry of the gospel. The Quirings then made their way to Hillsboro, Kansas, where Jake earned his B.A. degree at Tabor College in 1945. After joining the faculty at the Mennonite Brethren Bible College, Winnipeg, he completed a Bachelor of Divinity. He was a highly respected teacher and was frequently invited to speak in churches across Canada. On 25 May 1970 he was awarded an honorary Doctor of Divinity degree from Wilfred Laurier University.

Quiring taught at MBBC for ten years (1945-1955), and then accepted an invitation to pastor the Winkler Mennonite Brethren Church, where he had a fruitful ministry for seven years from 1955 until 1962. During these years Jake also taught at Winkler Bible Institute (1957-58; 1959-1962). The Quirings returned to Winnipeg in 1962, where Jake served first as instructor and then as president of MBBC from 1963 until 1966. From here the family moved to Clearbrook, BC, where Quiring served as pastor of the newly planted Bakerview Mennonite Brethren Church for nine years (1966-1975). He enjoyed his ministry at Bakerview greatly and the church grew from a relatively small congregation of 173 members to a membership of 430 during his ministry.

Following retirement from the pastorate, the Quirings spent three school terms teaching in a Bible school in Austria. After their return to Canada, Quiring served part-time in the Killarney Park and Kelowna MB congregations. He retired to Abbotsford in 1982, but even in his 80s, he occasionally accepted invitations to preach.

Throughout his life, Quiring took a keen interest in the life of the Mennonite Brethren Church, and served as moderator of the Canadian conference (1961-1963; 1964-1966; 1969-1973) and the BC Conference (1967-1969; 1970-1972). He also served as assistant moderator of both conferences and on numerous conference boards. At times he was critical of some of the trends and developments in the denomination, but his love for the church never wavered.

He was blessed with a keen mind and a good measure of humor and common sense, as well as with the gift of communication. Although he has not left us any theological works, he did produce several interesting manuscripts in which he reflected on the life of the church and on his own life. As a college teacher he contributed numerous articles to the journal, The Voice, which he edited for some time.

Quiring was a man of great integrity and honesty. He reflected deeply on the Christian faith wrestled with theological questions throughout his life. Although he struggled with doubts from time to time, he remained a committed follower of Christ throughout his life.