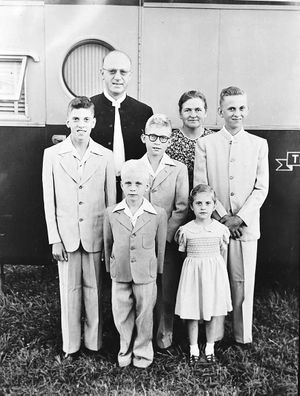 George R. Brunk II graduated from Eastern Mennonite School (1930) and worked on the family fruit farm. On 22 July 1934, George R. Brunk II was ordained by lot to the ministry of the Warwick River Mennonite Church. As Mennonite ministers were not paid, he supported himself with a peach and apple farm. Brunk found preaching to be difficult until he had an experience of the filling of the Holy Spirit in 1939. In 1942 he founded the Warwick River Christian School.

After becoming a minister, George R. Brunk began to pursue higher education. He earned a BA (1946) from the College of William and Mary, and a BD (1949), ThM (1965), and ThD (1967) from the Union Theological Seminary in Richmond, Virginia. His ThD dissertation was on “Some changing concepts in twentieth century evangelism and missiology.”

Beginning in 1951, George R. Brunk II became involved in tent revival crusades, initially in conjunction with his brother, Lawrence. Known as the Brunk Brothers Revival Campaign, he led evangelistic crusades in many of the major Mennonite centers in North America for 30 years. He is said to have participated in over 100 crusades, 25 of them in Canada. The first crusade in 1951 was held in Lancaster, Pennsylvania, and lasted seven weeks. The crusades were a dramatic change from traditional Mennonite experience, and George’s oratorical skills, showmanship, and plain-speaking preaching style influenced many to make life-changing decisions.

The role of Margaret Brunk was crucial, especially during the tent-revival years, as she managed the home life and raising of children as George was gone for extended trips, or while the whole family was part of tent crusade trips during the summers. She was a humble, self-effacing woman who was steadfast in support of her family.

George R. Brunk II’s theological perspective was reflected in the Sword and Trumpet, a periodical founded by his father. He was associate editor of the periodical from 1943-1989; he then became editor, serving until 2001.

In 1984 as George became increasingly concerned about doctrinal issues within the Mennonite Church (MC), including theological liberalism he believed to be taught in Mennonite post-secondary schools, as well as evolving understandings of biblical nonresistance, and women in leadership, George R. Brunk II, together with J. Otis Yoder and Sanford Shetler founded the Fellowship of Concerned Mennonites.

Brunk withdrew from the Mennonite Church (MC) and the Virginia Mennonite Conference in 1988 when that conference allowed the ordination of women. In 1990 he formed the independent Calvary Mennonite Fellowship in Harrisonburg, which he pastored until 1998. In his last years, he was recognized as a minister in the Biblical Mennonite Alliance.

George R. Brunk II has an enormous impact on the Mennonite Church, especially during the most active years of his tent revival ministry. His later years were more controversial when he publicly charged specific Mennonite colleges and seminaries and specific individuals with faulty theological teaching. Although he was blunt in his criticism, he was loyal to his family, including his sister, Ruth Brunk Stoltzfus, who became an ordained minister.

Joe Lapp, a president of Eastern Mennonite University said of Brunk on his 90th birthday, “There have been occasions when his sense of clarity on some things challenged me. Yet, Brother George’s sincere desire for the church to be faithful to the living Word and the word written, caused me to listen and to take note of his concerns.”

Brunk, George R. A trumpet sound: a crisis among Mennonites on the doctrine of Christ. Harrisonburg, Va: Fellowship of Concerned Mennonites, 1988.