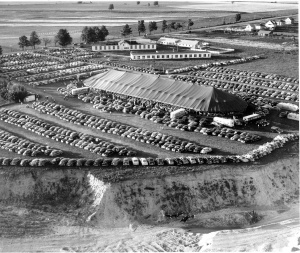 The Brunk Brothers Revival Campaign (later known as Brunk Revivals, Inc.), an influential revival work among the Mennonites of North America, began in 1951. It was carried on by Preacher George R. Brunk II (1911-2002) of Denbigh, Virginia, the evangelist, and his layman brother Lawrence (1917-2003), who served as business manager and song leader. This team of Christian workers, using a large tent seating 6,000 persons, moved from one large Mennonite center to another during the open season from April to October, holding nightly meetings in a community for three-four weeks, to revive the church and evangelize non-Christians. The following communities were served through 1952: 1951, Lancaster, Pennsylvania, Souderton, Pennsylvania, Orrville, Ohio, Manheim, Pennsylvania; 1952, Johnstown, Pennsylvania, Waterloo-Kitchener, Ontario, Goshen, Indiana, Harrisonburg, Virginia, Morgantown, Pennsylvania, as well as two campaigns in Florida in the winter of 1952. In each series of meetings from 1,000 to 2,000 persons accepted Christ for the first time, renewed their covenant as members, or made a deeper consecration as Christians. The work was financed solely by offerings. Although modern methods of organization were used, the methods of preaching and the sermon content, etc., were simple and in conformity with good evangelical Christian and historic Mennonite faith. Over the duration of the campaigns, which ended in the early 1980s, over 100 tent crusades were held.