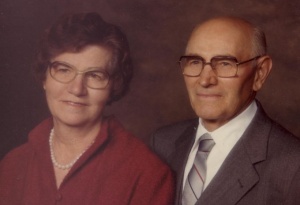 Inspired by a kindly employer, Bernard Epp became a Christian, believing this was the message that the world needed. He was baptized on 12 July 1930 in Coaldale, Alberta and joined the Coaldale Mennonite Brethren (MB) Church. He studied at Coaldale Bible School for three years and Winkler Bible School for one year before moving on to Prairie Bible Institute, where he studied from 1936 to 1938. In 1943 Bernard studied at Tabor College in Hillsboro, Kansas from 1943 to 1945, earning his Bachelor of Arts degree. In 1945 he studied at the Canadian School of Linguistics. Bernard was ordained by the Coaldale Mennonite Brethren Church in March 1942.

In April 1938, Bernard arrived in Fernheim, Paraguay, joining the Licht den Indianern (Light to the Indians) missionary association to help with the study and construction of the Lengua Indian language and the evangelization of the tribe. In 1940, Susie Dueck, a nurse from Coaldale, Alberta, accepted Bernard’s marriage proposal and traveled to Paraguay. Susie worked in the hospital and taught basic hygiene and health care to the Indians. Horrified by the Lengua practice of infanticide, the Epps took two abandoned Indian baby girls into their home. This action initiated proactive directives by the Mission, eventually resulting in the Lenguas’ cessation of infanticide and curbed the decimation of the tribe.

At times Epp’s convictions and ideologies went contrary to church leadership opinion. Criticized for not westernizing the Paraguayan Indians, Bernard held to his conviction that the foremost need of the Indian was not westernization but the need for Christ. When shiploads of post World War II refugees came to Paraguay, Bernard heard the anguished pleas of the young unmarried women, most of whom had suffered rape and were being denied permission by the church to be married wearing traditional white wedding dresses. Bernard gently reminded the church leaders that the women were victims of war and virgins in Gods’ eyes, and church policy was reversed.

In 1949 illness forced the Epp family’s return to Canada. The family farmed first in Vauxhall, Alberta, until 1959, and then in Chilliwack, British Columbia, until 1974. The zeal for teaching was such that Bernard continued to do church work while Susie and the children attended to much of the farm work. Bernard was a preacher and leader in the Vauxhall Mennonite Brethren Church and an itinerant evangelist among the Alberta MB Churches from 1950 to 1959 and a Bible school teacher in the Coaldale Bible School from 1952 to 1955. In British Columbia Bernard served as a lay and interim pastor in the East Chilliwack MB Church, Broadway MB Church, Chilliwack Mennonite Church, and King Road MB Church in Abbotsford, British Columbia. He also served as a conference delegate and Bible Study leader in the Clearbrook MB Church from 2003 to 2006.

A life-long student and teacher of the Bible, Bernard Epp earnestly desired to serve his Lord, who had shown such great love, forgiveness and mercy to him.

Janzen, A. E. Survey of Five of the Mission Fields of the Conference of the Mennonite Brethren Church of North America Located in India, Africa, Brazil, Paraguay and Colombia. Hillsboro, KS: Mennonite Publishing House, 1950: 89-115.