From GAMEO
Revision as of 07:59, 28 February 2014 by RichardThiessen (talk | contribs) (Added category.)
(diff) ← Older revision | Latest revision (diff) | Newer revision → (diff)
Jump to navigation Jump to search
A checked version of this page, approved on 28 February 2014, was based on this revision. 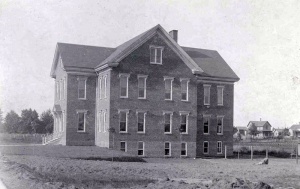 Elkhart Institute (1894-1903), the forerunner of Goshen College, was a secondary school established at Elkhart, Indiana, by an unofficial group of laymen and ministers to offer educational opportunities to the young people of the Mennonite Church (MC). During the first year, 21 August 1894 to 4 June 1895, it was a small proprietary school owned and operated by Dr. H. A. Mumaw, a Mennonite physician with a strong interest in education, and conducted in the G. A. R. Hall in downtown Elkhart. The enrollment was small, chiefly of short-term students (10-20 weeks) securing training in commercial subjects and a review of elementary school subjects for prospective teachers’ examinations, although the high-sounding name, Elkhart Institute of Art, Science, and Industry, promised much more.

The real history of the school began with the transfer of the school from proprietary to corporate ownership on 16 May 1895, when the Elkhart Institute Association was incorporated to take over the school and continued to operate it at Elkhart to 1903, then in Goshen as Goshen College to 1906, when it turned over the school to the newly organized official church agency, the Mennonite Board of Education.

After a period of weakness (1895-1898), during which the principals (four of them in succession), much of the small staff, and most of the small student body were non-Mennonite and the program of the school was poorly defined, N. E. Byers, B.A., a Mennonite from Sterling, Illinois, became the principal. Byers reorganized the school, established it on a sound academic basis, and led its development into a junior college (1903) and finally a senior college (1908). J. S. Hartzler, a preacher of Topeka, Indiana, was the other strong figure in the school, along with the president of the board, preacher-evangelist J. S. Coffman. Lewis Kulp, treasurer of the board, early business manager and financial supporter, was a strong asset. C. Henry Smith, who came in as teacher the same year as Byers (1898), was an important faculty member. Other important teachers were D. S. Gerig (1900-1903), E. J. Zook (1901-1903), J. W. Yoder (1900-2), and W. K. Jacobs (1899-1903). 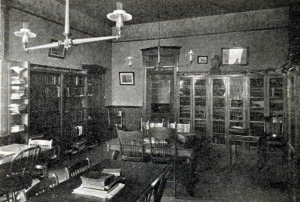 The academic program included Latin-Scientific (College Preparatory), Seminary (3-year course), Commercial, Bible, and Normal curriculums, plus a summer school from the beginning and a special Bible Term (six weeks in the winter beginning in 1898). The teachers in the Bible Term were S. G. Shetler, Daniel Kauffman, J. S. Coffman, A. D. Wenger, and George R. Brunk. The student body grew more rapidly beginning about 1900, reaching a peak of 245 in 1902-1903, including the Summer Session and Special Bible Term (Academic 134, Commercial 59, Bible 52). A total of 73 certificates of graduation were issued; 23 commercial, 6 Bible, 12 Normal, and 32 Latin-Scientific and Seminary. The Latin-Scientific course actually included about the equivalent of first year college. A considerable number of the Latin-Scientific and Normal graduates went on to advanced college, university, and professional study to become leaders in various fields (1900, S. F. Gingerich; 1901, I. R. Detweiler, F. S. Ebersole, C. E. Bender, J. M. Kurtz, John Umble; 1902, W. B. Christophel, G. J. Lapp, A. B. Rutt, O. C. Yoder, D. B. Zook; 1903, S. T. Miller). Among the outstanding Bible graduates were A. J. Steiner and I. W. Royer of 1900, Mrs. J. A. Ressler (Lina Zook) of 1901, and I. R. Detweiler of 1902. An Alumni Association was organized in 1901 (now the Goshen College A.A.) composed of all those who completed a course of two years or longer.

The first and only building of the Institute was dedicated 22 February 1896, located on South Prairie Street almost opposite the Mennonite meetinghouse. The school had no other campus than the lot on which the building stood. The need for space for expansion led to the search for a new location which culminated in the move to Goshen in 1903 as the result of an attractive financial offer, with the condition that the name become Goshen College.

From 1898 on the school had an active student life with a strong religious and Mennonite emphasis, and many of the student activities and organizations (Y.P.C.A. and literary societies, for instance) which played such a vital role in the later Goshen College were established in the old Institute.

The Elkhart Institute pioneered in a great movement of education in the Mennonite Church (MC) which has now become a powerful force in the life of the denomination with three colleges, ten high schools, a theological seminary, and two schools of nursing. It had to face much opposition and misunderstanding, since the great majority of the church was opposed to it, although the two local Indiana-Michigan Mennonite Conferences (Mennonite and Amish) and the General Conference endorsed it in the period 1898-1902. Those who fought the battle for education in these early days, board members, faculty and staff, and students, deserve much credit. Chief among them, without whom the enterprise would probably not have succeeded, were J. S. Coffman, N. E. Byers, and J. S. Hartzler.