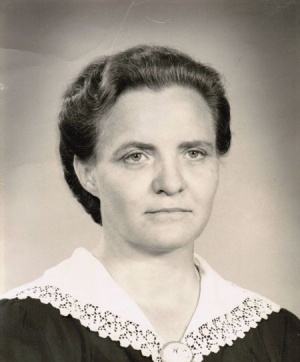 Susie’s father was a minister in the Mennonite Brethren (MB) Church and a teacher in Klubnikovo, Orenburg. Susie came to faith in Christ as a child and was baptized on 30 June 1923.

In 1926 the Brucks family immigrated to Canada, arriving in Quebec City on 9 May 1926 and gradually making their way to Coaldale, Alberta. Susie was one of the first students to attend the Coaldale Bible School, later continuing her studies at Prairie Bible Institute in Three Hills, Alberta. This school placed a strong emphasis on missions and evangelism.

One evening in the summer of 1934 Susie felt God calling her to foreign missions. She asked God for a clear sign, specifically that the following Sunday the minister would speak referencing Mark 16:15: "Go ye into all the world and preach the gospel to every creature." Eagerly she left the Sunday School class she was teaching to find a place close to the front of the Coaldale MB Church where Rev. Johann A. Toews rose to announce his text: Mark 16:15. A “shiver of excitement went through” her as the next speaker, Rev. Benjamin B. Janz, rose to announce his text. He prefaced it with the comment that he could not understand why God had him change his text that morning, but God must have some purpose. His text was also Mark 16:15.

In 1939, Susie was approached by three Coaldale MB Church elders with "a commission from the Lord" asking if she would be willing to go to Africa. Soon after she moved to Yarrow, British Columbia, her application for mission service was accepted. Delayed by World War II, she took a one-year Missionary Medical Course in Toronto where in March 1944 she was notified by the Mennonite Brethren Board of Foreign Missions to prepare for immediate sail to Africa. That month the Yarrow Mennonite Brethren Church held a commissioning service for her. She was the first single female missionary to be sent on a foreign assignment from the congregation.

In Kinshasa, Congo, Susie took a tropical medicine course prior to commencing her work at the Kafumba station, deep in the Congo forest. Here Susie taught and led singing in children’s classes, conducted a 30-voice male choir, and served as nurse in the medical dispensary. Anxious to spread the gospel, Susie and her missionary team ventured 500 kilometers from Kafumba to the Ndengese country in their old station wagon, first by ferry, then along the potholed road, and finally on foot for a 30 kilometer trek through deep forest.

After her first term, Susie studied tropical medicine in Antwerp, Belgium, obtaining a certificate to practice in Congo. In 1951, Susie returned to Congo, this time stationed in Yassa where she would spend much of her next term. Before her second furlough, Susie received official recognition from the government as Infirmiere-Achoucheuse, officially recognizing her as a nurse and midwife. After a short break in Canada, Susie was called back to Matende, Congo, where she oversaw the medical work. Owing to severe political unrest during the early 1960s, all missionaries were instructed to leave the Congo immediately.

On her return once again to Canada, Susie realized that the country had ceased to be home; Susie’s heart was in Africa. She contacted Mrs. Haller, an associate whose orphanage was near to her former mission station and was immediately accepted by World Wide Missions. She returned to the Congo in May 1961, where she set up a dispensary, training Congolese helpers, with prenatal and baby clinics.

War seemed to follow Susie. In August 1964 she was invited to a Bible School in Nigeria where a witch doctor put a hex on her when she would not forward Mission monies to an Effeke native. With civil war approaching, Susie returned to Canada. But undaunted, in 1966 she once again traveled to Congo, now renamed Zaire, where she facilitated the transition of ministry to Congolese control.

After Susie’s marriage to Cornelius Dyck, the couple made five separate trips to her last place of work, the Bible School at Idiofa, Congo.

Susie Brucks was a career missionary. That deep inner sense of calling never left her, although the location for her many assignments varied greatly, as did the agencies with which she worked.