The hamlet of Chortitz, founded in 1898, was located in the Hague-Osler Mennonite Reserve. Initially its residents were Old Colony Mennonites who preferred to reside in hamlets rather than on individual farms. Their church services were held in the hamlet's German school. The 1930s were a troubled time in Saskatchewan with a decade long drought and depression and with the forced introduction of English language public schools causing a number of the hamlet's families to leave for Mexico. Their farms were purchased by other Mennonites some of whom now preferred to reside on their farms rather than live in the hamlet.

In the fall of 1938 the first Rudnerweider Mennonite Church ministers, Isaac P. F. Friesen and Gerhard Froese, visited Saskatchewan in response to personal invitations from a number of people in the Hague-Osler Mennonite Reserve. Preaching meetings were held first nearby in a public school in Hochfeld, Saskatchewan, and these lasted a week, then the following week evangelical meetings were held in a school in Gruenthal. These services resulted in the formation of a significantly large group of believers, mostly from the Old Colony Mennonite Church. In 1939 this group began to construct a building located on the Cornelius H. Doell farm east of Chortitz.

As a congregation they were not affiliated with any other group. In April 1939 they invited the Rudnerweider bishop, William Falk, to conduct catechismal classes with baptism to follow. However, the Rudnerweider Church declined for it had members only in Manitoba and was reluctant to encourage the formation of a congregation in Saskatchewan.

By 1942 Pentecostal and other influences on this group led a number to separate themselves from those meeting at the Doell farm. This new group met in the Hochfeld Bible School where many had been taking Bible classes. It was to this group in the School that Rudnerweider ministers visited and preached. In May 1944 a letter from John D. Friesen urged the Rudnerweider ministerial in Manitoba to found a congregation in Saskatchewan.

After consultation with other Mennonite congregations in the area to lessen the prospect of conflict, Rudnerweider Bishop Falk and a number of other pastors traveled to the Chortitz church and held two weeks of meeting. Three persons were baptized and a Rudnerweider congregation of 37 Members was formed on 7 July 1944. On 11 July three local members were ordained as pastors H. B. Zacharias, John D. Friesen and Cornelius Fast. The founding of this congregation, the Chortitz Rudnerweider Church, was followed by the moving of their building from the Doell farm to the north west corner of Chortitz in 1944. Here their cemetery was also located. 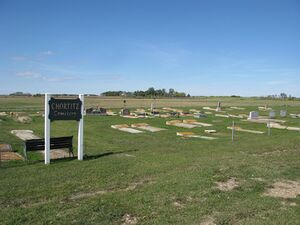 The leaders now also held Bible studies in the surrounding villages of Hochfeld, Hague and Neuhorst. Within a year the group in Neuhorst was large enough to found its own congregation.

The congregation membership was always small. In 1962 Pastor John Neudorf was serving as a congregational leader. By the 1950s almost no families were living in the Hamlet and it was dissolved. In 1963 the church closed as the 30 congregational members decided to merged with the Hague Evangelical Mennonite Mission Conference Church which was located 11 kilometres to the east. In 1964 the empty church building was moved 16 km. west to the village of Hepburn to serve the newly formed Hepburn Evangelical Mennonite Mission Conference Church. However, in 2021 the cemetery was still active and a well maintained.