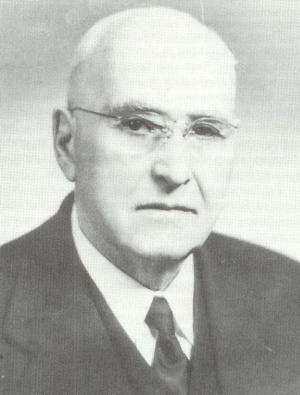 Isaac P. Friesen: Mennonite (General Conference Mennonite Church) evangelist, minister, and poet; born on 6 July 1873 to Peter Martin Friesen (1835-1893) and Katharina (Klassen) Friesen (1850-1896) in the village of Rosengart, Chortitza Mennonite settlement, South Russia. When he was still an infant his family immigrated to the United States. After one year they traveled from Fargo, North Dakota up the Red River to Manitoba, settling in Rosenort. Friesen was baptized on 22 May 1893 by Ältester Johann Wiebe and became a member of the Reinland Mennonite Church. He married Katharina Harder on 1 August (or 30 July) 1898 and they had six children. Isaac died 3 January 1952 in Saskatoon, Saskatchewan, Canada.

Friesen spent most of his life in Rosthern, Saskatchewan, the center of the large Rosenort Mennonite congregation. Isaac opened a hardware store in Rosthern in 1897 and became a successful business man. He had a life changing conversion experience at the age of 36 when in Long Beach, California on one of his frequent extended trips. Friesen was able to visit Palestine and other areas of the Ottoman Empire in the fall of 1910. He found this trip to be a very moving experience and wrote a book about it which he entitled "Meine Reise nach Palestina" (My Journey to Palestine, Winnipeg, 194?).

Friesen was elected along with his oldest son to the office of evangelist on 23 November 1919. He was then later ordained as minister on 8 July 1923. With the revivalistic character of his preaching he led most of the ministers of this large congregation, as well as those far beyond his own church. Friesen inspired his audiences with his fluent speech and the dominant emotionalism in his sermons. Even though he had only a grade six education, he wrote two widely-read books of poetry Im Dienste des Meisters (In the Service of the Master). He traveled throughout southern Manitoba as an evangelist, first part-time and then full-time.

In 1934 Friesen conducted a series of evangelistic services in Winkler, Manitoba, which led to the conversion of over a thousand adults. This resulted in the founding of the Rudnerweide Mennonite Church.

During his service in the ministry he liberally supported various Mennonite missionary undertakings. He donated his Rosthern house and property to help found the Rosthern Home for the Aged. He also supported the Children's Home on the Mennonite Youth Farm near Rosthern, and other missionary and welfare projects.

Warkentin, A. and Melvin Gingerich, compilers. Who's Who Among the Mennonites. North Newton, KS: Bethel College, 1943: 76.