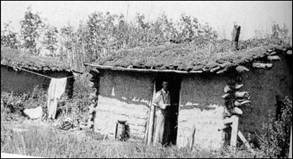 During the 1940s the Mennonite Brethren (MB) sought to evangelize Old Colony and Sommerfeld Mennonites in British Columbia, Alberta, Saskatchewan, and Manitoba. They tried to convert them by sending evangelists, colporteurs, and Bible school students. In Saskatchewan, around the turn of the century, these people had settled in villages west and east of the railway running from Regina through Saskatoon to Prince Albert. Hochfeld, almost directly east of Hepburn, featured a Bible school for several years (1942-44).

Hepburn was the home of Bethany Bible School and headquarters for the school's missionary arm, the Western Children's Mission (WCM). Margaret Epp states that many young people from this MB school, both men and women, found this outreach work to be a preparation ground for full-time service elsewhere. For example, Mary Letkemann (who married the missionary to Colombia, John Dyck) and Margaret Epp held forth at "preaching points, day schools for children ... and little Bible schools." Among the men, George Giesbrecht (who lived in an old blacksmith shop) helped to establish a day school in 1940 at Hague Ferry, on the river side of the railway. His work and that of others led to the adoption of this as a first field for a full-time mission outreach of the WCM .

The work of Bethany Bible School students was also facilitated by the evangelistic work of Rudnerweide (later Evangelical Mennonite Mission Conference [EMMC]) and Conference of Mennonites in Canada preachers among Old Colony and Sommerfeld Mennonites in the Hague-Osler area. It was that revival that made this community and its young people at all receptive to the Bethany school students.

John D. Friesen was one of nine who were baptized in the area in 1940. He was one of the first persons to enroll in this Bible school at Hochfeld. It was initiated by Henry G. and Amanda Rempel of the WCM, with the assistance of David Wirsche who later went to Colombia. Others who worked in the area were Jean Fehr, Helen Unruh, Erna Bartels, and Margaret Epp. Epp later wrote that she was there to help carry on the evening Bible school begun by the Rempels. Louis and Edna (Sawatsky) Goertz, who assisted David Wiens at Eagle Creek in 1943-1944, worked at Hague between 1943 and 1947. 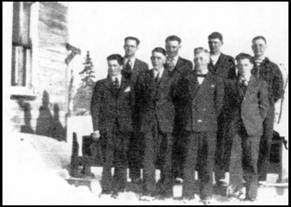 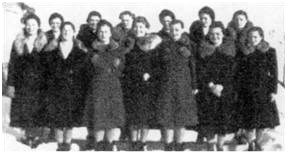 Hochfeld Bible Students, 1942-43, both women and men. Only very few of these young people were baptized by immersion (see text). John D. Friesen who supplied these pictures, is not shown. Henry Rempel, founding teacher, is back row left with the men; the school to their right; Amanda Rempel first row middle with the women

When John Friesen was invited to congregate the new believers from this area under the auspices of the WCM, he preferred to stay with the nucleus of believers from his own background. The real stumbling block was the MB demand that converts be rebaptized by immersion. This was a very strong factor leading towards the formation of the first Rudnerweide congregations in the Hague-Osler area in 1944.

From 1946 and 1952 Henry A. Willems, himself a graduate of Hepburn and an early home missionary, brought the WCM to the North Saskatchewan conference as its mission arm. There was, however, no further mention of a Bible school that close to Hepburn. This had the effect of incorporating the MB work at Hague Ferry as a mission church, while the Rudnerweide had a number of congregations under one large brotherhood church in the villages closer to Hochfeld. During the 1950s four MB couples, in quick succession, came to serve in Hague Ferry: Victor Nickels, George Reimers, Waldo Lepps, and Jake Kehlers. Kehler moved the church to Hague, on the railway, in 1960. It seems, however, that a Rudnerweide congregation formed there in 1963 had solid support and consequently the North Saskatchewan MB conference withdrew support in 1968.

Penner, Peter. "A Historical Survey of the Home Mission Work of the MB Conference of Canada." Bacheor of Theology Thesis, MBBC, 1957.