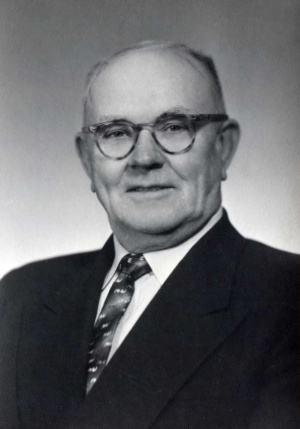 Martin Boese Sr.: farmer, businessman; born 20 March 1888 in the Crimea, Southern Russia. He was baptized in 1910 and became a member of the Mennonite Church in Kurushan, Crimea. In 1911 he married Maria (Quapp) Boese (20 January 1892-1 April 1976). The young couple farmed in Blumstein, Ukraine. During World War I, Boese Sr. served in the medical corps of the Russian Army. 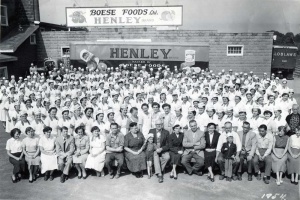 Soon after his arrival in Vineland, Martin Boese Sr. bought a 16-acre farm in Beamsville with a down payment of $1.75. With his sons he established a trucking business. In 1934, the Boese family bought 33 acres of government land in Virgil, which was divided among the family members. Four years later they purchased a 75-acre fruit farm in Port Dalhousie for $17,500. Boese Sr. expanded the farm to 200 acres and by 1945 had set up a fruit canning and processing plant. "Boese Foods" operated under the brand name "Henley" which, at the height of its production, was one of the largest processing plants in the Niagara peninsula, employing up to 1,000 women and 250 men in the canning season. Son John took over the Port Dalhousie plant from his father in 1958 while son-in-law Frank Andres operated a second plant in Leamington. Martin Sr. became chairman of the board, a position he held until his retirement in 1963 when the business was purchased by Canadian Canners.

On a visit to Paraguay in 1949, Martin Boese Sr. saw the plight of the post World War II  immigrants struggling to make a living in the Mennonite colonies and set out to help them come to Canada. The Boese family sponsored 240 people from Paraguay, Brazil and Germany. Many of them worked at Boese Foods.

Throughout his life, Martin Sr. showed a deep concern for the Mennonite Church. Upon arrival in Vineland, he became a member of the newly organized Vineland United Mennonite Church. In 1935 he served as chairman of the building committee and spent much time and labor in the completion of the church building. When he and his family moved to St. Catharines, he was one of the 16 founding members of the United Mennonite congregation. He supported the building of each of their churches, first on Carlton Street, then on Garnet Street, and finally on Linwell Road.

Martin Boese Sr. highly valued his family and many friends. In 1961 he and his wife celebrated their golden wedding and in 1971, within the family circle, their diamond wedding. On 23 July 1973 he died at age 85 and is buried at Victoria Lawn Cemetery, St. Catharines. Elder J. J. Thiessen from western Canada came to his funeral and spoke about his willingness to give help wherever the need arose. Martin Sr. was a remarkable man—a farmer—who at 43 years of age and with no funds arrived in Canada with his wife and children to become a highly successful businessman.