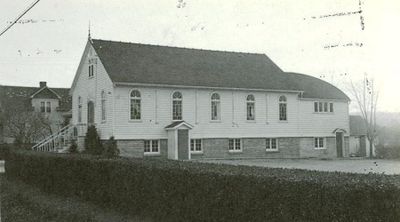 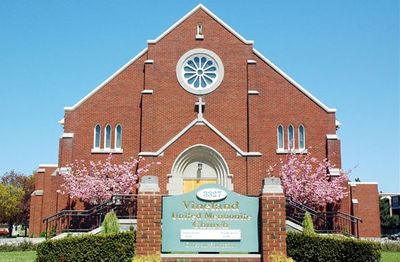 The Vineland United Mennonite Church had its origins in immigration of Mennonites from the Soviet Union in the 1920s. The first of these immigrants arrived in Vineland, Ontario, Canada in 1924 and were hosted by members of the existing Moyer Mennonite Church (now The First Mennonite Church). These German-speaking immigrants briefly worshiped with the Moyer congregation, but this was not satisfactory since the existing services was solely in English except for occasional scripture readings or hymns in German. For a time a German service was held prior to the English service. The elderly Old Order Mennonite minister, Joseph Wismer, may also have done some preaching for the early group. As was common in other communities where these immigrants settled, the Kirchliche Mennonites and Mennonite Brethren worshiped together until they had enough size to organize separately.

After Jacob H. Janzen arrived in Waterloo, Ontario in December 1924, a congregation was organized in Waterloo, and included Kirchliche Mennonites elsewhere in Ontario, including Vineland. A first baptism took place in Vineland in summer 1925. John J. Wichert arrived in Vineland in August 1926 and began giving leadership to worship services there. The Vineland group elected him as a candidate for lay ministry in 1927, and he was ordained in 1928. Cornelius K. Neufeld and Nicholas N. Fransen were also elected as ministers in 1929. Prior to Wichert's election, when a visiting minister was not available for Sunday worship, a sermon would be read from books of sermons.

The young congregation began a Sunday school already in 1926, and a women's organization soon after, though for several years it met with the women at the Moyer Mennonite Church. A German school was held on Saturdays for the young people. Other activities like choirs and youth groups also emerged in the 1920s and 1930s.

Until 1934 the congregation, still composed of United Mennonites (as the Kirchliche became called in Ontario) and Mennonite Brethren worshiped together, most often in a machine shed owned by Chris Fretz. In 1934 the Mennonite Brethren formed their own congregation, and in 1935 the United Mennonites built a church building across Victoria Avenue from the machine shop near the intersection of Culp Road. This building, with a 1942 addition, served the congregation until 1957 when a new building was erected at the present location on Second Street (now Menno Street).

Until 1956 the congregation had only one deacon, but as the congregation grew and needs increased more deacons were elected and ordained. Kathy Paetkau became the first female elected as deacon in 1982, although women had served alongside their husbands in an unofficial capacity.

The change to English began in the late 1950s. In 1973 the worship service was divided, and a short German service was introduced for those interested. In 2003 these services were discontinued.

In 2017 Vineland United Mennonite described its mission as: To make Jesus LORD in our lives and through our lives as we ...

Vineland (Ontario) United Mennonite Church (General Conference Mennonite), a member of the Conference of Mennonites in Canada, was formed by Mennonites who arrived from Russia in 1924-26 and later, who at first worshiped in an old abandoned sawmill. In 1927 they joined the United Mennonite Church in Ontario under the leadership of Bishop J. H. Janzen of Waterloo. The first ministers to serve this group were John Wichert, elected by the group in 1927, and Cornelius Neufeld and Nicholas Fransen, elected in 1929. Until that time sermons were read from books by someone in the congregation. On Dec. 24, 1935, a new meetinghouse was ready for occupation, built mostly by voluntary labor. On 13 April 1936, the congregation resolved to separate from the Waterloo United Mennonite Church and organize as an independent congregation under the leadership of Bishop Dietrich H. Koop. By 1942 the congregation had grown to such an extent that the church had to be enlarged. In 1944 Koop died and John J. Wichert was elected to this office. Other ministers serving the congregation are Nicholas Fransen, Abram H. Harder, and John W. Neufeld (ordained 1954). In 1957 a larger church was built of brick. The membership in 1958 was 348; John J. Wichert was the pastor.