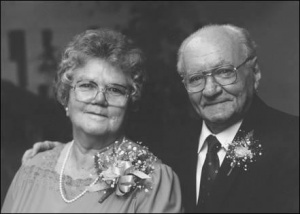 Frank J. Andres: entrepreneur and pastor; born 28 September 1907 in the village of Ladekopp, Molotschna Mennonite Settlement, Russia, to John and Katherine (Dick) Andres. He had six older brothers and one younger sister. Frank Andres received his primary education in the Russian and German languages in Kleefeld, and his secondary education in Mariawohl, Molotschna Colony, Russia. He was baptized in 1930 by J. P. Klassen in Arnaud, Manitoba. In 1934 he married Elizabeth Boese, daughter of Martin and Mary Boese. They had nine daughters and three sons. Frank died 12 October 1987 in Leamington, Ontario.

In 1926 Frank left Russia alone and never saw his parents again. He went to live in Morris, Manitoba where he worked for a Rempel family. In the fall of 1927 Frank attended the Mennonite Collegiate Institute in Gretna, Manitoba. Next he enrolled in the pre-med program at the University of Manitoba but could not continue because of a lack of funds. As a result, he found a job as delivery boy in the Piggly Wiggly chain (later Safeway) and soon became store manager. Frank Andres came to Ontario in 1932 to work on a fruit farm in Vineland, Ontario, where he learned every facet of fruit-growing and marketing. In 1934 J. B. Fairbairn, then Ontario's Deputy Minister of Agriculture, hired Frank to manage his farm. In 1936 Frank bought his first 10-acre farm and became assistant manager of the newly formed Niagara Township Fruit Cooperative. His interest in the canning business led him to a managerial position in the Niagara Canning Company owned by Peter Wall of Niagara-on-the-Lake. In 1946 Frank joined his father-in-law's Boese Foods Ltd., company as general manager. In 1949 Frank Andres was ordained into the ministry by Johann Wichert and served as leading minister in the United Mennonite Church on Garnet Street in St. Catharines from 1950-1953. Thereafter he continued preaching and officiating at weddings.

The Andres family left St. Catharines in 1958 to purchase the Pyramid Canners company in Leamington, Ontario. During this time, business travel became a regular occurrence for Frank, taking him to Toronto and Montreal to promote the Seacliff Brand of canned goods. As president of the Ontario Food and Processors Association his travels took him as far as London, England. During his frequent absences Elizabeth Andres kept life at home running smoothly. Frank's time at home was often spent working on sermons which he presented at the Leamington United, Faith, North Leamington, and Harrow Mennonite Churches.

In 1964 Frank sold Pyramid Canners. Many of his employees at Pyramid Canners were newcomers to Canada, and they remember him as a boss with a big and generous heart. They came to him with their problems and asked him for advice. They recall the Christmas celebrations at which Frank opened with a short sermon and prayer. This was followed by a time of singing German and English carols.

Thiessen, Gloria. "Frank J. and Elizabeth Andres." Biographies of our Late Leaders and Histories of the Mennonite Churches in Essex and Kent Counties 1925-1995. Edited by Astrid Koop and Gisela Schartner. Leamington, ON.: Essex-Kent Mennonite Historical Association, 1995.