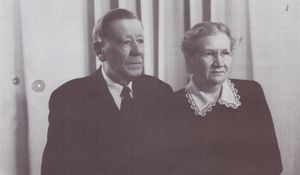 Johann's childhood and early school years were spent in Neu-Schönwiese before attending the Chortitza Zentralschule and Teachers' College. He served as the Neu-Kronsweide village schoolteacher for five years. He served the Kronsweide Mennonite congregation as a minister from 1904 and as elder from 1907 until his immigration to Canada in 1923. At the request of the church, Klassen moved his home from Neu-Schönwiese to Alt-Schönwiese so that he could be more centrally located. The years during the Russian Revolution were difficult for him. Murders, typhus, cholera, and famine all plagued the Schönwiese area, and the village was occupied at various times by both Machno bandits and Red Army troops.

In 1923 Johann and his family immigrated to Canada, eventually settling in Starbuck, Manitoba. In 1928 he founded the Schoenwiese Church in Starbuck, and when he moved to Winnipeg in 1929, the main center of the Schoenwiese Church was established there at the First Mennonite congregation. Johann served as its elder until his retirement in 1939. Klassen suffered from eczema in his later years and was advised to relocate to Vancouver, where he passed away in 1947.