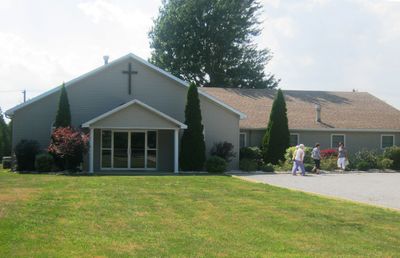 The roots of the Harrow Mennonite Church go back to a 200 acre tract of land northwest of Harrow purchase by 12 families and 2 single Mennonite immigrants in the fall of 1928. The first families took possession in March 1929 and began to hold services in the original farm house living room. Gerhard Papke is considered the founding leader of the group.

Most of the Harrow Mennonites affiliated with the Leamington United Mennonite Church. This arrangement worked for some 20 years. In 1951 the Harrow group began construction of its own church on Walker Road just north of the town of Harrow. This new church was dedicated in November 1951. Inevitably ties with the Leamington Church were severed. The congregation applied for a charter in 1953 as the Harrow United Mennonite Church and in 1955 this was granted.

Henry and Leonora Paetkau came to Harrow in the fall of 1978. Henry began as pastor, at first on a half time basis, then later as the church’s first full-time paid minister. During this time, Henry was much involved in the beginnings of the Windsor Mennonite Fellowship, an effort to establish a Mennonite church presence in Windsor. On 6 January 1985, Windsor Mennonite Fellowship began holding Sunday morning worship services. Henry served until the summer of 1985. These years in Harrow were blessed with fruitful outreach into the local community which broadened the membership base of the congregation and gave it new impetus.

In January 1980 the Harrow congregation took on an outreach project to sponsor six Vietnamese refugees. There were two young sisters along with a brother and three single males. It was quite a challenge for a small congregation to house, feed, and look after the needs of these new Canadians. After some time, they moved on and became self-sufficient.

For a year, Calvin Laur served the congregation with an eloquent preaching ministry. Calvin brought an amazing level of learning and interests in art to the ministry. Henry Dueck from Leamington then served on Sunday mornings for a year while the church carried out a search for a new pastor. Jim Brown began as pastor in the fall of 1990. Jim had high conference visibility, being the assistant moderator of MCEC. For a small congregation, the Harrow Church has contributed leadership to the larger Mennonite community through Conference and broader Mennonite board and committee participation.

The first Sunday morning service in the church building was held on 13 September 1996 with a memorable processional from the old building to the new building. A special Dedication Service and Open House was held 6 October 1996. The total cost of the new building was around $240,000.00 which was totally paid for within the year.