Alcohol Among the Mennonites of Northwest Germany 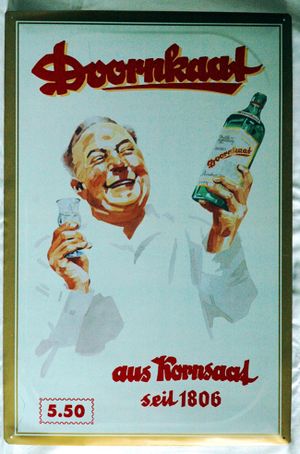 Among the Mennonites of North Germany beer brewers and brandy distillers were relatively numerous. This may be due in part to the fact that not all professions and trades were open to them. In the region of Lübeck in the sixteenth and seventeenth centuries the Roosen family was even engaged in the manufacture of gunpowder.

"It was the especial achievement of Privy Councillor Jan ten Doornkaat Koolman to develop the distillery founded by his father into a business of outstanding economic importance for the city and to make the Doornkaat the popular whiskey of East Friesland and beyond. On Jan. 9, 1886, the city of Norden instituted a spectacular torchlight parade for the celebration of the fiftieth anniversary of his business career. In the procession one of the objects of exhibition was an original export flask with the legend, '2,000,000 liters annual production.' From the laudatory addresses of his colleagues on this occasion the following sentences are characteristic: 'It is a day of blessing and of joy not only for Your High Well-Born and your family, but also for the entire city and vicinity. All the world therefore understands the necessity of celebrating the day. (This apology because the honored man was very averse to such publicity of his person.) We have the most immediate cause for doing so. For indeed from this thriving business substantial contributions flow daily to the city coffers, and a population of laborers is created, exemplary in its kind. But we also come with hearts filled with gratitude for all the benevolent deeds which have flowed to the city so richly and amply from your hand from time to time during the last fifty years. We thank you for the faithful devotion with which you have occupied all the posts of honor as senator, Bürgervorsteher, deputy to the local parliament and the Reichstag. As a citizen always true and conscientious and with a heart full of love for all your fellow citizens, aiding and supporting where it was a matter of relieving distress and assisting the unfortunate, in all idealistic undertakings co-operating helpfully and actively, you are the unparalleled example of loyal citizenship.'

Concerning Mennonite distilleries in Leer, Fast gives the following information: "The distillery and yeast factory of the brothers Fritz and Gerhard Brouer was of general importance in that it developed large tracts of formerly unusable moorland. Such reclaiming of the heath was of especial value at a time when the government had not yet subsidized such undertakings and the work was of a pioneering nature. The founder of the business, the 82-year-old Consul F. Brouer, is still living (1946)."

Concerning Friedrichstadt and Eiderstedt we read in Robert Dollinger's Geschichte der Mennoniten in Schleswig-Holstein (Hamburg and Lübeck, 1930): In Eiderstedt the merchant Andreas Linnich "furnished the prince with seventy three Reichstalers' worth of Hamburg beer during his visit to Toenning in 1659." In Friedrichstadt there were Mennonite brewers and distillers about 1700. "One of the respected brewery owners was Claus Jakob Tetens, who in 1715 in a period of nine months furnished 243 barrels (Tonnen) of beer to the garrison town of Tönning, which was more than one sixth of the total supply. Among his customers were the military, the mayor, and the two Lutheran pastors." In Friedrichstadt Spanish wine was provided for communion in 1668. In 1770 intoxication was made the ground for applying the "small ban." In Eiderstedt the prominent boat owner, merchant, and landowner Adam Teekes of Ameland in West Friesland, had to pay a fine in Westerhever in 1742 for desecrating the Sabbath by immoderate drinking (Zechen).

See also Alcohol ; Alcohol Among the Mennonites of Northeast Germany