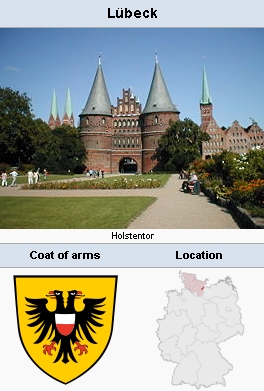 Lübeck, a city (2005 population 213,983; 1955 population 238,000; coordinates: 53° 52′ 11″ N, 10° 41′ 11″ E) in Schleswig-Holstein, Germany, is an important Baltic seaport. As early as the middle of the 16th century a wave of the Anabaptist movement was felt in East Holstein (see Holstein). Until 1700 there was a group of Mennonites in Lübeck, although they were never "privileged," nor did they have a church or school. No records written by them have been preserved. Refugees from the Jülich district settled there after 1532 as renters and tanners, and even as manufacturers of gunpowder. Mayor Jürgen Wullenwever seems to have favored them.

In 1535 and again in 1553 and 1555 the theologians of the "Wendic cities," of which Lübeck was one, passed unified measures against them. The Anabaptists, "with whom God has scourged the world," were to be expelled from all the localities; sheltering them was made punishable; anyone who was not accepted in one city should not be taken into another of the group; for the sake of caution the preachers of the state church were to be examined in the Augsburg Confession and its "Apology." Outsiders should announce themselves to the spiritual and secular authorities before taking lodging; nevertheless they repeatedly found reception and work without announcement or questioning. Repeated renewals of the mandates did not have the desired result. In spite of exiles being subject to expulsion on a week's notice, "Netherlanders tainted with all kinds of suspicious religions" kept appearing within and outside the city. In 1546 Menno Simons had a discussion in Lübeck with N. M. van Blesdijk, the son-in-law of David Joris, which did not lead to unification, and in 1552 an equally fruitless discussion with Adam Pastor on the deviating doctrines.

The Thirty Years' War brought new accretions from Fresenburg and the rest of Holstein, which however apparently did not disturb the council. The Mennonites were summoned and examined by the clergy, with scant results. The people liked the strangers; in 1671 a Menist woman was employed as a "Bademutter." About 1690 a preacher held the forbidden "conventicula" even during divine services. This time the council interfered, and promised the church authorities that they would prevent the sectarian baptism of Lutherans and sectarian marriages. The protest of the accused that they had nothing to do with the dangerous fanatics of Münster did not carry any weight. In 1735 there were only two or three Mennonite families counted in the city. In 1700 there had been seven. Hans Hermansz (d. ca. 1722) was the preacher of the congregation.

We learn some particulars about the economic importance of the Mennonites "in the office of lace-work and ribbon making"; Isaak von Eken, one of its founders, was accused of having made forbidden propaganda for his sect and having changed the pledge with an addition that avoided the oath. But his reference to the punctual payment of his taxes as well as to the toleration Mennonites were receiving in other places had the intended effect.

The decline of the little congregation was chiefly the result of Lutheran propaganda; they watched carefully to see that the children were baptized, sometimes baptizing them without the knowledge of their parents.

Little is known of internal conditions among the Lübeck Mennonites. They held their meetings in the neighboring Ovendorf, observed communion twice a year, or else went to Fresenburg for this purpose. The visit of outside preachers was welcome. Jakob Denner of Hamburg is said to have obtained permission to hold quiet church services (1687-1694, 1700). Ministers had, in general, no fixed salaries; an exception may have been the noted Hamburg preacher Gerhard Roosen. The rites forbidden in Lübeck (baptism, etc.) were usually performed in Hamburg. In the second half of the 17th century twenty persons from Lübeck were baptized in the Hamburg-Altona congregation. In the 19th and 20th centuries there were still a few Mennonites there.

In 1950 a new congregation was organized at Lübeck out of Danzig-West Prussian refugees who had been meeting in an unofficial way in the city since 1945. In 1954 the baptized membership was 144. The congregation was under the pastoral oversight of the Hamburg Mennonite congregation.