Alcohol Among the Mennonites of Northeast Germany

Among the crafts brought to the Vistula delta from Holland by the Dutch Mennonite refugees, the distilling of brandy and whiskey, that is, the manufacture of fine liquors from raw brandy, played a by no means insignificant part. Two of these businesses founded by Mennonites reached a more than local importance; indeed they had in a sense a European and even world-wide importance.

Since 1598 there was a distillery in the Breitgasse in Danzig in the house Zum Lachs (Lachs: salmon) founded by Ambrosius Vermeulen (Ter Meulen, van der Meulen, Vermoelen, Mole), which is still in existence, even though the business was moved out of Danzig in 1945. The firm was passed down on the female side of the family. In this way it passed into the possession of the Mennonite families Wedling (Isaac Wedling), Hecker (1730 to Dirk Hekker), and Bestvater (1758 to Dirk Bestvater), and later into non-Mennonite possession. This early period of the firm is preserved by the labels on the bottles, depicting the old firm trademark, the salmon, and also the old tavern sign, the six-pointed star, and the inscription "Isaac Wedling Wwe und Eydam Dirck Hekker." The products of this firm were known far beyond the borders of Germany, especially the famous Danziger Goldwasser with its floating goldleaf, the Kurfürstliche Magen, and the Krambambuli. Both Lessing in his Minna von Barnhelm, and Heinrich von Kleist in his Der zerbrochene Krug mention the liqueurs of the Danziger Lachs. In 1745 Christoph Friedrich Wedekind dedicated a poem to the Krambambuli under the title "Lob-Gedicht über die gebrannten Wasser im Lachs zu Dantzig," with 102 stanzas, the last of which is,

This poem is the source of the student song, "Krambambuli." 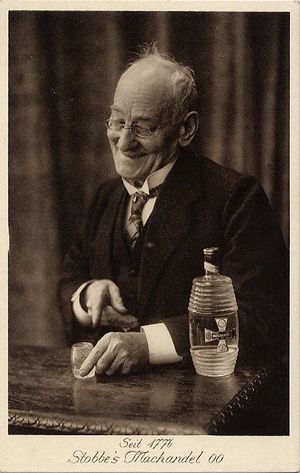 In a later period the firm of Peter Stobbe of Tiegenhof in the Grosse Werder was founded, whose Machandel (elderberry whiskey) likewise attained a more than local importance, even reaching America, and was sold for more than two hundred years up to 1945.

Even though from about the middle of the eighteenth century more and more Mennonites in northeastern Germany engaged in the distilling of brandy as well as in the liquor trade and barkeeping, so that in the city of Danzig the terms "Mennonite" and "tavern" became almost synonymous, this fact cannot be attributed to a particular love of the Mennonites for this trade. A deeper reason for this fact is that all other vocations were closed to them by the constantly more rigorous rulings of the trade guilds. On 24 November 1749, for example, the guild of lace and tapemakers decided "that from now on no Mennonite youth may be enrolled or certified, nor shall any be admitted to the estate of master." Similar decisions were passed by the Danzig city council in November 1749 and in 1755. The consequence for a Danzig family, the Kauenhovens for example, which had between 1656 and 1749 only two distillers but more than twenty lace and braid makers, was that the latter craft now disappeared among them and eighteen Kauenhovens were engaged in the manufacture and sale of alcohol.

The increasing demand for "Branntwein Danziger Art" and the occupational limitations caused many Mennonites of Danzig to settle in other cities of the German Northeast. In 1724 there were already six Mennonite families engaged in distilling in Königsberg in Prussia. Later there were Mennonite distillers also in Pillau, Rastenburg, Tilsit and Memel. A fairly accurate picture of the participation of the Mennonites in the manufacture and sale of alcohol in northeast Germany is given by the official Mennonite register of 1776, which was published by Gustav E. Reimer. Among a total of 12,603 Mennonites there were twenty seven engaged in the liquor business in Danzig and its suburbs, five in the Grosse Werder district, thirteen in Elbing, three in Memel and four in Tilsit. For Königsberg the list of citizens shows in the period of 1749-1809 a total of fifty-three engaged in the liquor business among a total of 109 Mennonites in all vocations. Some of their taverns were known throughout the city; for example, in Danzig-Langfuhr the Machandeltreppchen, later Zum goldenen Löwen (owner Heinrich Zimmermann, 1787-1845), in Königsberg Zur goldenen Axt (owner Heinrich Kauenhowen, 1797-1871), in Memel the "Bunte Bock" (owner Wilhelm Sprunck, 1765-1871), all members of well-known Mennonite families. In 1726 the noted Danzig elder Hans von Steen became a merchant and distiller. Quite a number of the inns, taverns, and distilleries in the area were in Mennonite hands.

After 1800, when the restrictions that prohibited the Mennonites from engaging in other pursuits in the Danzig area were removed, Mennonite participation in the liquor traffic declined rapidly. Julius Zimmermann (1821-1898), a noted master mill-builder in Danzig, reported, "When I observe the life of the Mennonite congregation in Danzig I find to my gratification that among the means of livelihood the number of barkeepers among them has decreased in a very conspicuous degree, since, according to investigation made by Loewens, of seventy-four engaged in this business in our youth, there are only four engaged in it now, which goal and success has been attained only by an essentially higher education in comparison to former times." However, as late as 1936 the German Mennonite address book listed four tavern keepers in the city of Danzig and twice as many in the country congregations. There was a saying among the Mennonites even in Berlin, "Anyone who is a genuine Mennonite must be able to hold his drinks." At the meetings of the West Prussian and Danzig church board meetings and conference sessions, neither alcohol nor tobacco was missing.

Thus it is evident that the urban Mennonites of northeast Germany played an important part in the manufacture and distribution of alcohol, however almost exclusively with brandy and liquors. The number of brewers and beer-barkeepers among them is negligible. From a purely economic point of view they greatly benefited their communities; Randt reports that the six Mennonite distillers of Königsberg in the period from 1718 to 1724 paid an excise tax of 29,311 talers. The extent to which the Mennonites of northeast Germany contributed to the misuse of alcohol cannot be ascertained here. They themselves probably had no scruples against the business in which they were engaged, for public opinion of the time saw in brandy and whiskey only their stimulating and healing effect. There is no evidence that the Mennonites of that time had a reputation for inebriety. On the whole the opinion concerning them expressed by Randt was the common one: "In no court records are there complaints or charges of the authorities or other people against the Mennonites on the point of laziness and shiftlessness, but on the contrary they are always praised as quiet and industrious people."

See also Alcohol; Alcohol Among the Mennonites of Northwest Germany