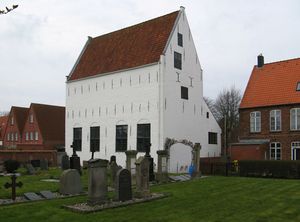 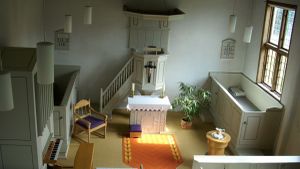 Friedrichstadt, a city (coordinates: 54.37601, 9.08967 [54° 22′ 33″ N, 9° 5′ 22″ E]; 1950 population, 3,600; 2005 population, 2,500) on the Eider River in Schleswig-Holstein, Germany, founded in 1619 by Dutch Remonstrants with the consent of Duke Frederick III of Gottorp, and laid out in the Dutch pattern. By its grant of religious liberty it became an asylum for all who were persecuted for their faith. The Mennonites received a charter on 13 February 1623 which permitted them to settle there and carry on their trades; but at the same time it required them to live quietly and not to cause offense either "privately or publicly" to annoy anyone in religious matters. All the Mennonites living in Friedrichstadt and in the Eiderstedt area were freed from the oath and from military duty.

This far-reaching charter was confirmed on 17 February 1657, again on 25 November 1695, and by all the succeeding dukes and kings, finally by King Christian VIII of Denmark. In no other part of Germany did the Mennonites enjoy such extensive rights and privileges. The congregation had the rights of incorporation; their preachers enjoyed state recognition, freedom from communal taxation (which was not rescinded until 14 April 1869), and permission to wear their special garb.

In the earliest period there were in Friedrichstadt three Mennonite congregations: (1) the High German (merged in 1653 with the Flemish); (2) the Flemish; (3) the Frisian. On 12 May 1639 a short-lived union was formed between the churches at Hamburg, Glückstadt, and Friedrichstadt. Though the union did not last, there was always a friendly relationship and close connection between these three churches.

The Flemish and Frisian congregations merged on 16 April 1698; the Frisian congregation then had 70 members. It held its services in the rear of the "Alte Münze" which one of their members had purchased in 1652. Neither group was now willing to forsake its place of meeting. The lot decided in favor of the Frisians; but because their building was not very suitable, the congregation in 1708 bought the "Alte Münze" (picture in Mennonitische Blätter, 1904, 46). On 29 May 1708 the first service was held in the remodeled building, which still served the congregation in the 1950s. In 1839 a thorough remodeling was begun which was completed in 1884. In 1850 it suffered extensive damage in the bombardment of the city; the organ purchased in 1847 was also struck.

The Friedrichstadt congregation in 1703 had 178 communicant members. One hundred years later it had only 36. An attempt made by South German Mennonite families to settle in the city apparently failed. On 13 October 1693, 12 families came from the Upper Palatinate; but on 9 April 1698 most of them returned to South Germany and the rest immigrated to America. Only two families remained in the city, one named Strickler from Ibersheim, and one Egly, probably also from there. Neither exists at present.

The great decline in the congregation is explained in part by the ruling brought about by the Lutheran clergy after the death of Duke Frederick III, that no Lutheran was permitted to join the Mennonites; if the latter permitted it, they would be deprived of all their privileges. No Mennonite could marry a Lutheran without a dispensation and the payment of a fee, and then only on the condition that the children be christened as Lutherans. (In 1823 Preacher Jakob van der Smissen succeeded in having this law abrogated in the city; therefore the rural Mennonites saw to it that their children were born in the city in order to be able to claim this privilege for them.) Again, the ruling that Mennonite services could be held only in the city had a deterrent effect on the development of the congregation, for many rural members were unable to attend the city services for long periods. Still worse was the fact that the services were conducted in the Dutch language, which was used only rarely in the country. The "black death" in 1713 snatched away 52 members. Visits of Dutch and Hamburg preachers like Bastiaan von Weenigem, Gerrit Roosen, P. Beets, and especially Jakob Denner aided in sustaining church life. When they no longer came the congregation declined perceptibly.

The church had a capital of 100,000 marks, which was managed by two elders, of whom one had charge of the ministerial fund, the other of the poor fund. Later the two funds were united into one. The church record was begun in 1763. The church was always interested in the common welfare of the brotherhood, and assisted wherever there was need among the members. The Swiss, Palatine, and Polish Prussian Mennonites were aided by them. In 1850, when the city and vicinity were badly damaged by a flood, the congregation was aided by the Dutch Mennonites. Menso Draaisma was the first trained preacher. He studied at the Amsterdam Mennonite Seminary and served in Friedrichstadt 1746-1784. He was followed by Sybrand Martens 1784-1816, Jakob Mannhardt 1828-36, J. C. van der Smissen 1838-1868, H. Neufeld 1869-1899, and Samuel Blickensdörfer 1899-1920. Besides them, outstanding service was given by Deacon Jan Jelle Schutt (leader 1805-1855) and his son Jelle Jansen Schutt (b. 1802, deacon 1836-1886); and Christian Grosskreutz (deacon-treasurer 30 years, d. 19 January 1899). The membership in 1898 was 34, with only two catechumens; in 1919 it was about 45, with 25 children; and in 1952, 29, with 13 children. The congregation was served in 1953 by Albert Goertz of Grünhorst, who had pastoral charge of a number of Mennonite congregations in the area.