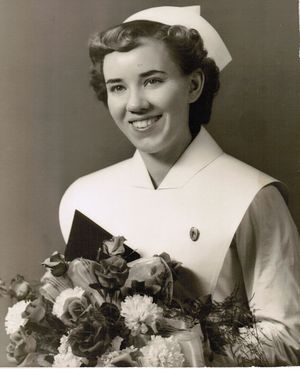 Helen grew up in rural Saskatchewan, where her father Peter Schellenberg made his living as a farmer and blacksmith. From her earliest years, Helen had a passion for healing sick animals and helping ailing neighbors. Her mother Agatha, the midwife for the Swift Current, Saskatchewan municipality, inspired Helen with an ever-ready bag of medical instruments, her engaging stories, and sturdy work ethic. In this setting Helen’s passion for nursing was vigorously nurtured. After completing elementary school in Blumenort, Helen earned her secondary school diploma by completing Saskatchewan Department of Education correspondence courses, allowing her to graduate in the Wymark, Saskatchewan School District.

When the Schellenberg family moved to Abbotsford, British Columbia in 1948, Helen decided to enter the nursing profession. With a gift of $100.00 from her brother Peter to pay for entrance costs, Helen began her studies at St. Paul’s School of Nursing. She graduated with honors in 1951, and earned a special diploma in bedside nursing for emergency and cardiac wards. She chose to continue working at St. Paul’s until 1953, when she relocated to Ontario to pursue further professional training at the Kitchener-Waterloo Hospital.

Helen met her future husband John in Kitchener during this time, and they were married in August 1953 at the South Abbotsford Mennonite Brethren Church. They returned to Ontario where John had contracted to teach at Eden Christian College, Niagara-on-the-Lake. Helen began working in the Hotel Dieu Hospital in St. Catharines, and then as an office nurse. Two years later the Wittenbergs moved to Abbotsford where Helen found employment in the Matsqui, Sumas, & Abbotsford Hospital. To expand their horizons, in 1965 the young family moved to Tabora, Tanzania where John taught English at the Kazina Secondary School and Helen became the "go-to nurse," dealing with all manner of emergencies.

After returning to Abbotsford, Helen resumed employment in the MSA Hospital. In 1973 she joined four nurse friends to pioneer a new Government of BC Department of Health initiative – Home Care Nursing. This programme allowed patients to recuperate in their own homes with regular nurse visits, as needed. The Home Care Nursing program was so successful that it was expanded provincially, a source of professional satisfaction for Helen.

After her retirement from the Home Care Program in 1988, Helen was invited by the Menno Place and by the Fraser Valley Health Region to organize a "visiting nurse" practice for the Menno Pavilion. When Helen retired from this program in 1998, she had completed fifty-one years of nursing.

In retirement, Helen became a dedicated community volunteer. She was a hostess and seamstress for the athletes at the 1995 Canada Summer Games in Abbotsford. She enjoyed being involved in Girl Guide clubs in church, and making quilts with her husband John. Helen regularly cashiered at the Mennonite Central Committee Thrift Store in Clearbrook, and most importantly, for many years was a greeter at the new Abbotsford Regional Hospital.

It was in retirement Helen discovered her talent for watercolor painting. Her artful creativity adorned the walls of her home and many personal greeting cards.

Although Helen was a dedicated nurse, she spent quality time with husband and children. She loved family and was deeply loved by them. Reading Scripture brought beauty and peace to Helen. The motto of St. Paul’s Hospital School of Nursing, "Enter to Learn; Go Forth to do Good," became Helen’s inspiration. To Helen’s community and family she leaves this legacy: take risks, develop relationships, nurture love, respect, and honor.