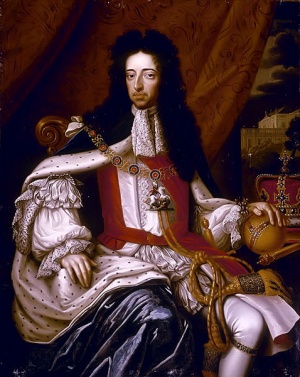 William was born 14 November 1650 in The Hague, son and only child of William II, Prince of Orange (1626-1650), stadtholder of Holland, Zeeland, Utrecht, Guelders and Overijssel, and Mary, Princess Royal of England (1631-1660), daughter of King Charles I of England. William was born eight days after the death of his father, and became Prince of Orange immediately upon his birth. William died 8 March 1702 at Kensington Palace, London, and was succeeded as Prince of Orange by his distant relative, John William Frisco, Prince of Nassau-Dietz (1687-1711), and eventually as stadtholder of all seven Dutch provinces by John William Frisco’s son, William IV of Orange (1711-1751). His wife’s sister Anne succeeded him in England, Scotland and Ireland.

William was a haughty, reticent man, an energetic politician, and capable general, a paladin of Protestantism who often defended the Mennonites in the Netherlands and elsewhere against oppression. On 15 May 1673, he issued a mandate by which the Mennonites in North Holland were exempted from military service. On 11 November 1688, he suspended the suit against the Mennonite preacher Foecke Floris, who was charged with Socinianism. On 11 August 1694, and again on 14 July 1697, he wrote a letter to Johann II Wilhelm, Elector of the Palatinate, in favor of the Mennonites who were suppressed in his territory and particularly in the Duchy of Jülich.