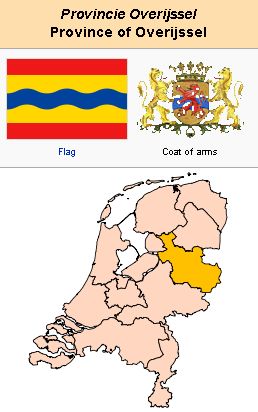 Overijssel, a province in the Netherlands, area 1,295 sq. miles, pop. 554,000 in 1959, including 2,700 Mennonites in 1959; 1,109,250 in 2005. In 1959 the 2,700 Mennonites were found in the three towns of Deventer, Zwolle, and Kampen, in the northern tip of the province, where the congregations of Blokzijl, Giethoorn, Steenwijk, and Zwartsluis are located, while a smaller congregation in Oldemarkt died out in the middle of the 18th century; also in Twente in the southeast of the province, opposite the German border, where the congregations of Almelo, Borne, Hengelo, and Enschede, formerly also Goor, are located. In the three cities we come upon Anabaptists soon after 1530, and congregations were formed soon after. The congregation in Deventer, concerning which we are well informed, had a very hard time, whereas those at Kampen and Zwolle apparently developed peacefully.

The congregations in the northern point date from the end of the 16th century. In Twente, which remained under Spanish rule until 1626, the Mennonites could hardly expand before that year. Nevertheless there are indications that the congregations of Almelo and Enschedé date back to about 1580. The Mennonite groups were augmented especially by the immigration of weavers and merchants from Westphalia, Germany. (The supposed immigration of a large number of Mennonite weavers from Flanders, Belgium, is very questionable.) They have been of great importance economically. Twente, now a great industrial center, in the manufacture principally of textiles, became what it is largely because of the Mennonites. In Overijssel there was no federation of congregations, as in Friesland; the congregations were too independent for such a step.

On the whole, the records of the Mennonites in Overijssel are so scarce that it is impossible to create an exact picture. The magistrates in this province were often very ungracious to the Mennonites. In 1633 they forbade them to have their marriages performed in their own meetinghouses; they were to be performed by the civil authorities after being proclaimed three times in the Reformed churches (these regulations were repeated in 1636, 1649, 1653, 1659, and 1698). In 1625 Mennonite church meetings were forbidden in Overijssel, but in 1631 their meetings were tolerated on the condition that they would not be held publicly. From about 1690 the magistrates became more lenient.