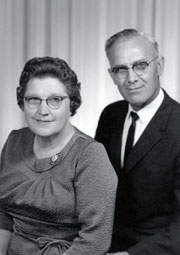 When Marie was twelve, her mother died, prompting Marie to leave the church and three years later to move to Winnipeg for work. However, after turning her life back to God at age 18, she moved back to Steinbach, where she finished her high school studies before moving to Saskatoon, Saskatchewan. For the next four years, she lived with her married brother while working at the local Eaton’s department store in the food and catering department.

Although she had the opportunity to get further training in her work at the store, Marie Toews felt called to full-time Christian service. Instead of accepting a scholarship at a local college, she studied for two years at the Saskatchewan Bible College and then left to continue her studies at the Winnipeg Bible College in Otterburne, Manitoba. During her studies in Saskatchewan, she met Joe Wiebe, who was also studying for a future in church work. They were married on 3 August 1938. In 1943, Joe and Marie left with their two children for Stuartburn, Manitoba, to work with a church planting mission under the Christian Endeavor Society. Since the community had a large number of Ukrainian-speaking people, the Wiebes took language lessons to help them communicate more effectively.

From 1943 to 1969, Marie and Joe Wiebe worked in Stuartburn, Ashern, Morden, and Winnipegosis. They visited schools, held Sunday schools and street meetings, and worked with summer camps. Some of the work they did with children later led to the formation of the Red Rock Lake Bible Camp. In 1957, the Wiebes moved to Steinbach for a two-year rest period. Next, they moved to Lindal in the Pembina Valley and then to Winnipegosis in 1967. During this time, the Wiebes’ daughter Eunice died.

Soon afterwards, Marie and Joe Wiebe left Manitoba for a four-month assignment near Guadalajara, Mexico, with the Mennonite Brethren Conference. There, Marie used her storytelling abilities as she dressed up in the typical clothes of the local Mennonites and told stories of the Bible and Christian life. When the assignment was over, the Wiebes returned to Winnipegosis for a short time but left due to health problems. Next, they moved to Winnipeg in 1969, where they joined the Portage Avenue Mennonite Brethren Church. They worked in visitation and hospital chaplaincy while also being active in the church. A heart attack in 1983 left Marie in bad health and she died on 12 April 1985. Joe died in 2001.

Marie Wiebe was a dedicated church worker who used her talents to help the many different people she encountered. Through her work in Manitoba and Mexico and through her commitment to the church, she left a legacy of faithfulness for the people around her.

Durksen, Hedy. Along Highways and Hedges: The Story of Joe and Marie Wiebe. Winnipeg: Christian Press, 1977.