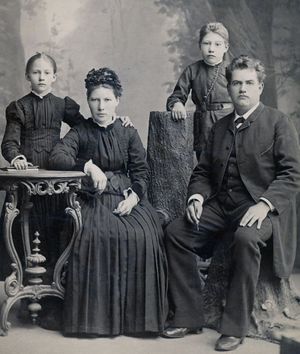 Jakob received his education at the Zentralschule and Teacher's Seminary at Chortitza, and then taught school for 28 years. He was or­dained a minister of the Kronsweide Mennonite Church in 1881, and elected elder on 12 May 1902 to serve alongside Elder Peter A. Klassen. Wiebe lived in Kronsweide 1875-1880, Bergmannsthal 1880-1905, and Einlage 1905-1907. He was succeeded as elder by Johann P. Klassen, the son of Wiebe's predecessor.

Like all Mennonite Ältesters and pastors in Russia, Wiebe was unpaid. However, as an Ältester he received an annual stipend of 200 rubles -- ostensibly to keep the Church books. He was poor because his church duties often interrupted his ability to work. Some in the community recognized his needs and from time to time the more wealthy church members would anonymously put money in his bank account which was held in the Mennonite owned Niebuhr Bank in the village of Chortitza.