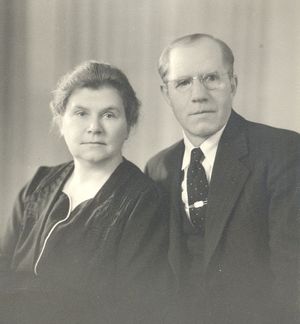 Herman was born on the on the estate of Hermann A. Bergmann (1850-1919), Bergmannsthal, near the Chortitza Mennonite Settlement. There he spent his childhood and teenage years, and also received his education. On 2 June 1913 he received baptism upon his confession of faith and was admitted as a member in the Kronsweide Mennonite Church.

Herman trained as a bookkeeper and managed the day-to-day operations of the extended family’s brick and construction business in the city of Aleksandrovsk (now Zaporizhzhia). Herman’s older brother Jacob used the bricks in constructing many of the public buildings in the community including building the city jail. As Russia was drawn into the First World War Herman Wiebe served in a Mennonite medical unit (Sanitätsdienst) on the Turkish Front and stood with Russian troops on Mount Ararat. At one point he went about one kilometre behind the Turkish front lines to bring out a wounded senior Russian officer. For this act of bravery he was awarded the St. George Medal, 4th Class. When medical supplies ran out Herman also participated in operations and amputations without anesthetic. The wounded were given alcohol to dull the pain; then the cutting and sawing took place.

As the Russian Revolution and Civil War began, troops were withdrawn from the Turkish Front and Herman returned to his home in Aleksandrovsk. During the turmoil of the Russian Civil War one evening Herman was picked up on some unknown charge, likely a curfew violation, and thrown into a cell in the city jail with 25-30 other men. Later that evening guards would come and take out a man and then a couple of minutes later there was a short burst of machine gunfire. The guards then returned, took out another, and repeated their executions until there were only three or four remaining in the cell. At this point there was a change, instead of machine gun fire there was a single rifle shot followed by rushing about, yelling and indiscriminate gunfire. The guards never returned. In the morning someone kicked Herman awake and asked what he was doing in the cell. He replied he had no idea why he was there. The soldiers told him to leave for they were not going to feed him. Evidently the routine executions made the guards careless and the last man jumped his guards and ran and was chased most of the night. Then much later that night the unit running the jail was changed and the new soldiers did not know why there were people in the jail so they were all released.

In 1927 the Wiebe family was allowed to immigrate to Canada and they settled in Milden, Saskatchewan. The following spring the Wiebe family acquired a farm located between Glidden and Madison, Saskatchewan. As Herman had already been elected as pastor in the Kronsweide Mennonite Church in the Chortitza Mennonite Settlement, he was soon elected as the leader of the small local congregation, known and the Glidden- Kindersley Mennonite Church, eventually part of the larger four-congregation Ebenfeld Mennonite Church. On 31 July 1942, Wiebe was ordained to the ministry by Ältester J. J. Thiessen.

The congregation built a small meetinghouse on the Wiebe yard and worship services were held until the early 1970s when the membership declined. Herman served all aspects of congregational life, including youth work, music ministry and Sunday school. After the death of his wife Margareta in 1954, Herman’s son and his family took over the farm and he lived there until his health began failing. In 1973 he moved into the Mennonite Nursing Home in Rosthern, Saskatchewan, where he died in 1975.