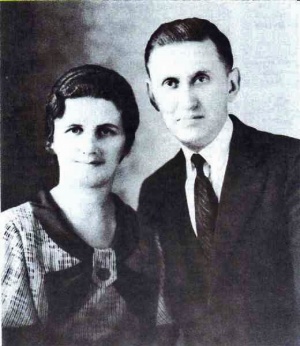 Peter A. Vogt: Mennonite entrepreneur; born on 14 October 1900 in the village of Schönwiese, Chortitza Colony, South Russia. He was the youngest of ten children born to minister Andreas Vogt (1854-1914) and Aganetha Block (1857-1930).

As a child Peter attended the Schönwiese village school and worked in his fathers' dry goods store. He then graduated from the Chortitza Secondary School. Like his siblings who had gone on to study education, nursing or business, Peter had dreams of studying law at University. Unfortunately the outbreak of World War I made this dream impossible and inaugurated years of hardship for Peter and his family. In 1914 his father died. Then in 1917 revolution came and Peter was conscripted into the White Army. Though he survived this ordeal, the trauma of it haunted his dreams and remained with him for the rest of his life. Tragedy struck again in 1919 when Peter's oldest brother, Andrew, died of typhus, leaving behind a young widow and two small children. Gradually some stability returned to the Mennonite colonies in Russia and some believed that the worst was over. Others, including Peter, his mother and several siblings, took this opportunity to leave Russia and immigrated to Canada.

Peter and his family came to Canada in the summer of 1923. They arrived in Steinbach, Manitoba just in time to help bring in the harvest. A little later Peter began working as a sales clerk for K. Reimer & Sons and it was here that he met his future wife. Susanna "Susan" Reimer (1904-1986) was of Kleine Gemeinde background but had not been baptized when she met Peter. In spite of their different backgrounds Peter and Susan decided to marry in October 1925. The wedding was held in the Schönwiese Gemeinde (which later became First Mennonite) in Winnipeg where they had both become members through baptism. Being the first "mixed marriage" of a Kanadier and Russländer their wedding received a significant amount of attention from the local media. The following year their first son of six was born.

If Peter had still harbored any hope of going to University, it was at this time that he laid that hope aside for good, realizing that it would be too difficult to learn English with a young family, in a new land. Instead Peter, like his father before him, decided to try to make a living in the world of business. He continued to work in the Reimer's store for a while and then very briefly he and his brother-in-law, Arnold Dyck, became partners in the printing business. Though Peter saw little future in the printing business, it was later sold to G. S. Derksen who developed it into a thriving enterprise. Economic times were bleak, but in spite of this Peter and his brothers John and Abram decided to open a grocery store in the early 1930s. After a few years Peter moved out on his own and eventually established "Economy Store" in 1938. Peter brought to his business experience, the ability to speak Ukrainian, German and some French, as well as a genuine appreciation for the people he served. Over the next decade conditions improved and gradually Peter's store prospered. He could afford to expand, build a connecting house and buy a car. His six sons all helped run the family business in addition to two young girls: a niece, Friede Vogt, and Susanna's younger sister, Liesa Reimer, whom they adopted.

Although running the store was a demanding business, Peter found time to pursue other interests. He loved music and taught himself to play the piano. He had a special appreciation for opera which led him to make several trips to New York and Minneapolis to attend performances of the Metropolitan Opera. He also acquired a large collection of classical records over the years which he enjoyed playing on his gramophone. For various reasons Peter and Susan were culturally and socially isolated from most of Steinbach society. Nevertheless they regularly entertained family and close friends in their home and welcomed their children's friends as well. Peter's sense of cultural isolation was eased when he purchased a radio in the 1930s and could tune into broadcasts from Germany. Unfortunately this also led RCMP officials to suspect him of being a Nazi sympathizer during the war. Though summoned to appear before a judge, Peter was acquitted of all charges. As a father Peter demanded much of his children. He taught them how to work hard, to be independent and instilled in them an appreciation for higher education. Peter's third son, Arthur, had had a stroke at the age of two which left him permanently paralyzed on his left side. Arthur's handicap often frustrated his father but during Peter's last years, Arthur's faithful support allowed a deep friendship to develop between father and son.

Peter A. Vogt had experienced disappointment as well as hardship, and at times felt he had achieved very little during his life. Nevertheless he was able to rise above life's circumstances. For almost 50 years he owned and operated Economy Store in Steinbach. He raised a large family and celebrated 60 years of marriage with his wife, Susan. Near the end of his life Peter developed Parkinson's disease as well as a blood disorder. When his health began to fail, he and Susan moved into Bethania Personal Care Home, founded by his sister Maria Vogt (1881-1961) and brother Abram Vogt (1887-1968) in Winnipeg. After experiencing a series of strokes Susan died there on 26 March 1986. Peter A. Vogt, a gifted man whose life is an example of courage and perseverance, died on 12 March 1989.