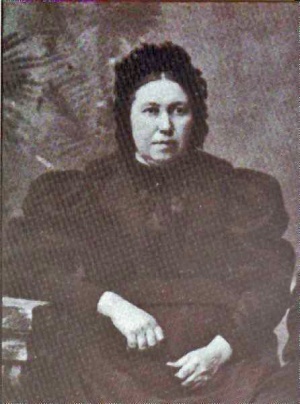 Aganetha Block Vogt: a courageous Mennonite matriarch; born in the village of Kronsgarten, Chortitza Colony, South Russia on 13 July 1857. Aganetha was the oldest of five children born to David Block (1829-1866) and Aganetha Falk (1836-1909). On 13 February 1879 she married Andreas Vogt (1854-1914), an unpaid Mennonite minister who supported his family by running a dry goods business. Together they had ten children, five sons and five daughters. As Andreas was often called away to serve in his capacity as a minister the major responsibilities of managing the family business, running the household and raising ten children fell to Aganetha. In 1914 her husband Andreas died just after World War I began. Aganetha persevered through the hardships of war, revolution, famine and disease. She lost two sons, Andrew Vogt (1885-1919) and David Vogt (1890-1920), who died of typhus within a year of each other. When immigration to Canada became a possibility, it was Aganetha who negotiated the sale of the family property. Aganetha came to Canada with seven of her children and their families in August 1923. They settled in Steinbach, Manitoba and it was here where Aganetha Vogt died at the age of 73 on 4 September 1930. She was buried in the local Pioneer cemetery.

Aganetha Block Vogt was an exceptional woman who possessed intelligence, high energy and a take-charge sort of personality. As a parent she was strict, quick to give orders and at times a little too controlling in the lives of her children. Nevertheless she loved her family dearly and also won their respect and admiration. Aganetha was curious about everything and took a special interest in medicine. She had a good head for business which she used in managing the family dry goods store in Russia, as well as in keeping the early records for the hospital her daughter Maria Vogt (1881-1961) opened. Aganetha adjusted well to life in Canada and although she mellowed over the years, she remained a vital force in her family until the end of her life.