Summer Bible School, sometimes called Vacation Bible School, an auxiliary teaching agency of the Sunday school, operated for 2-4 weeks in the early part of the summer vacation period largely for children of grade-school age, but often including at least the first two years of the high-school age and kindergarten, that is, the age range of 5-16 years. Except for scattered single schools of mixed character the first true summer Bible school was conducted in New York City in 1898, while the first fully organized summer religious day school in which the graded children's school was the main feature was held at Ripon, Wisconsin, in 1908. The Presbyterian Church was the first to promote the vacation Bible school on a church-wide basis through its Board of Home Missions in 1910. In 1911 the Daily Vacation Bible School Association was established to promote such schools in the USA. In 1915 the Northern Baptist Convention became the second denomination to promote the DVBS on a nationwide basis, soon followed by many other Protestant denominations. In 1912 A. L. Lathem, pastor of the First Presbyterian Church at Chester, PA, in protest against the nonreligious recreation and manual work features of the Daily Vacation Bible School, started an all-Bible school which he named Summer Bible School. His pattern was followed increasingly by the more conservative evangelical groups. 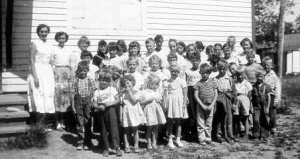 The first strictly Mennonite summer Bible school was started in 1923 by Dean Noah Oyer of Hesston College, Hesston, KS, although Edwin Weaver had conducted a community vacation Bible school in 1922 at Wakarusa, IN. In 1924 the Prairie Street Mennonite Church at Elkhart started its school. By 1926 there were four such schools in the Mennonite Church, including one at Portland, OR, and one at Scottdale, PA, the latter promoted by C. F. Yake, who soon became the outstanding promoter of the cause in the church, and the writer or editor of the earliest summer Bible school manuals. By 1933 there were 40 schools in the Mennonite Church. The Mennonite school, though using the Lathem name, was somewhat different in type from it.

The need for curriculum materials was sensed from the very beginning. Outlines of courses used by various schools were published in the Christian monitor in the early years of the movement. However, to provide a standardized guide, the General Sunday School Committee appointed a summer Bible school subcommittee which prepared a manual of summer Bible school courses, published by the Mennonite Publishing House at Scottdale in 1928. The committee was composed of Noah Oyer chairman, C. F. Yake editor, and Paul Erb. The manual contained instructions for organizing and conducting a summer Bible school, and provided ten three-week outlines from Kindergarten I and II to Grade 8. It was designated Departmental graded all-Bible course, providing ten years' work.

An entirely new course, called the Herald summer Bible school series, was then prepared with graded materials for thirteen years of Bible school: one nursery, two kindergarten courses, courses for eight grades, and a course each for grades nine and ten. Approximately a dozen writers and artists and an editor were employed to produce these materials which, after their publication in 1947, become widely used throughout the evangelical Protestant churches of America. Writers were Katherine Royer, Mary Royer, Ida Bontrager, Elizabeth Showalter, Clarence Fretz, and Russell Krabill; the editor was C. F. Yake. The materials were Bible-centered and experience-related. A teacher's manual with a pupil's workbook and supplemental teaching materials are all integral parts of the materials for each course. The work was all done under the Curriculum Committee of the Mennonite Commission for Christian Education, led by Paul Mininger, chairman. The use of these materials  had a most beneficial effect upon the Mennonite Church (MC).

More than two thirds of the editions of these Scottdale materials were sold to churches other than Mennonite, and more than twice as many pupils from non-Mennonite homes as from Mennonite homes were reached yearly. This does not include the outreach in foreign lands. In 1958 a corps of workers was busy in Basel, Switzerland, translating the courses and preparing materials in German and French, and promoting summer Bible camps throughout Europe. This was carried on through the Agape-Verlag created in 1955 as a European agency of the Scottdale publishing house, with co-operation and support from the Mennonite Central Committee. Most of the courses have been translated into Spanish at Scottdale, and were sold in Puerto Rico and Latin-American countries.

Alternative approaches have been introduced. For example, weekend summer Bible School beginning Sunday afternoon and concluding Monday evening for grades six through ten. Team teaching (usually husband-wife teams) was used for the first time in Scottdale to present the Herald Omnibus Bible curricula. Box lunches were provided by the congregations for Sunday evening. Monday's lunch was served by the women of the church with a hot dog and watermelon cookout in the evening meal. Devotionals consisted of campfire programs each evening.

The Herald summer Bible school materials and program were made available in India in Hindi and in Europe in German and French, with a few grades translated into Italian. The Herald Summer Bible School Series was revised in 1958 and again in 1966/67. In 1976/77 the course was rewritten, built mostly on the same Bible texts. A five-day, closely-graded course was developed from the ten-day curriculum to meet the need for shorter schools.

The Herald Omnibus Bible Series was released in 1973 and 1974. Outlines for this closely-graded course were developed by Paul M. Lederach with James E. Horsch as editor and Marjorie Waybill as associate editor. This series explores what the Bible and Jesus have to say about the issues children and youth face. This multipurpose course was designed for use in five-day vacation Bible schools, church camps, released-time Christian education, clubs, and week-day or Sunday evening study.

The daily vacation Bible school (Die Sommerbibel Schularbeit in the early reports), was initiated among the Mennonite Brethren in Canada by Bethany and Winkler Bible Schools in 1933. The mission to children, as recalled by Henry Warkentin, awakened unprecedented interest and missionary zeal and became the first organized expression of missionary vision. From small beginnings that engendered much enthusiasm in the 1930s and the 1940s daily vacation Bible schools (DVBS) peaked for the Mennonite Brethren between 1957 and 1965. The big question raised about DVBS was what happened to the converts? How many churches developed from this work? John Dyck stated in 1966 that after nearly 25 years of children's work, they had not established one permanent mission.