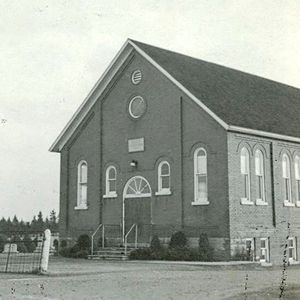 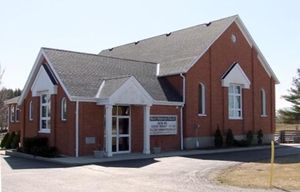 The Shantz Mennonite Church, near Baden, Ontario, is rooted in a German Lutheran immigrant named George R. Schmitt. George and his brother, John, came to North America in 1828, and relocated to Waterloo County soon after.

A log school house was built on the Schmitt farm in 1832. George Schmitt worked for Bishop Benjamin Eby for a time, and likely through Eby's influence became a Mennonite. He was baptized by Eby in 1840, and six months later was ordained as a minister for a congregation that began meeting in the schoolhouse on his farm.

In 1853, a stone meetinghouse was built on land donated by David Y. Shantz, across the road from the Schmitt farm. As was customary, the church became known by the name of the land's donor. The adjacent cemetery began at this time.

In the early years, services were every fourth Sunday; this changed in 1886 to every second Sunday. Worship was in German until the end of the 1800s when English began to be used alongside German, and soon totally replaced German. Orphan Wismer (1869-1951), who was ordained in 1898 while still in his 20s, was not comfortable in the German language, and began to preach and quote scripture in English. His wife, Sarah, also had to make adjustments due to her husband's new role as minister in the clothing that she wore. Sarah had to put away her beads and jewellry, and wear a plain dress to suit the bishops.

Sunday school at Shantz Mennonite began in about 1883. Initially the purpose was to teach German so children could read the Bible. The change to lesson helps and Bible study came around the beginning of the 20th century.

In the 1920s it became clear the stone meetinghouse was no longer adequate. The present brick building was dedicated on 13 October 1929. It had a basement for Sunday school, as well as a kitchen.

Among the activities at Shantz Mennonite in the early part of the 20th century were Young People's Bible Meetings held Sunday evenings, a literary society shared with other local Mennonite churches, and singing schools in which young adults and others learned four part harmony singing. In 1918 a local women's sewing circle began at Shantz, initially held in members' homes until the 1940s when it shifted to the church basement.

In 1959 an addition to the church provided additional space, new washrooms and improved kitchen space. Another addition came in 1988.

In 2017 the congregation's vision statement said: We are followers of Jesus Christ committed to:

Shantz Mennonite Church (Mennonite Church), located in Waterloo County, Ontario, north of Baden and about eight miles west of Waterloo, is a member of the Ontario Conference. It is locally also known as the Upper Street Church. It was founded in the 1830s, the first settlers having been George R. Schmitt and John Schmitt, from Alsace. George Schmitt (d. 1882) was the first minister. The first meetinghouse, a stone structure, was built in 1853 and remodeled in 1900. It was replaced in 1929 by a red brick building. Among the other ministers who served the Shantz congregation were Tobias Bowman (ord. 1875), Orphen H. Wismer (ord. 1898), and Leslie Witmer (ord. 1937), the pastor in 1958.

It is improbable that the Ohio-Canada West (General Conference Mennonite) movement greatly affected the Shantz congregation. However, at the neighboring Geiger church, south of Baden, Ulrich Geiger, a minister, was influenced by this movement and was out of fellowship with the main body for a time. Divisive influences seem to have touched the Shantz congregation. The Wayland List of 1853 indicates that Amos Cressman, a deacon, was not in fellowship, though he lived close to the Shantz church. He is buried in the little Crosshill Mennonite plot several miles north, although the Cressman family plot is in the Shantz cemetery. (See also Wellesley).