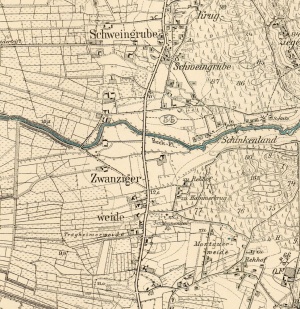 The First Partition of Poland in 1772 resulted in the creation of a new province in 1773, called West Prussia, in which Tragheimerweide was located. Tragheimerweide was situated in the district (Kreis) of Stuhm until the end of World War I, when it came under the jurisdiction of the German province of East Prussia. In 1928 the villages of Tragheimerweide, Zwanzigerweide, and Schweingrube were combined into one political unit. The village came under the control of Nazi Germany during World War II until February 1945, when it was occupied by Soviet forces and returned to Poland.

In 1740, Michał Bieliński, the Starost of Sztum, granted 84 hectares of land to Mennonites. In 1758, Tekla Bielińska leased some of the land for 30 years to the following settlers: Heinrich Nickel, Gils Ewert and Hans and Henrich Ewarts. In 1770, Franciszek Bieliński renewed the 1740 contract for the next 30 years with the following settlers: Hans Markwart, Abraham Zels, Henrich Pauls, Peter Peters, Franz Gerz, and Abraham Penner.

Mennonites who were residents of Schweingrube were members of the Tragheimerweide Mennonite Church.