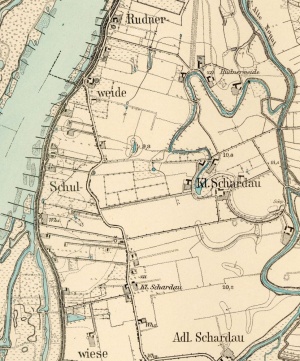 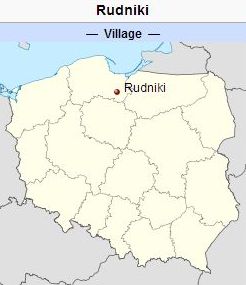 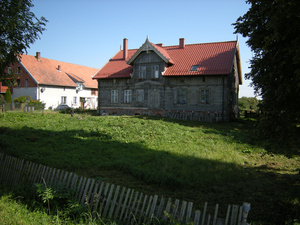 House in Rudnerweide, built in the 2nd half of the 18th century, including a barn from 1753.
Source: Catalogue of Monuments of Dutch Colonization in Poland

Mennonites expelled from the Tilsit marshes, East Prussia, settled here in 1724, draining and reclaiming the swampy area. The family names of these settlers were Arendt, Block, Ediger, Flamming, G(o)ertz, Jantzen, Nickel, Penner, Quiring, Schroeder, Unrau, and Wichert. In the Dutch Naamlijst the congregation is called "Stuumsche Needering op Swijngrube." It was later called Tragheimerweide or Zwanzigerweide. It belonged to the Frisian branch, also being called Waterlander.

The First Partition of Poland in 1772 resulted in the creation of a new province in 1773, called West Prussia, in which Rudnerweide was located. Rudnerweide was situated in the district (Kreis) of Stuhm until the end of World War I, when it came under the jurisdiction of the German province of East Prussia. In 1928, Rudnerweide and Klein Schardau were merged into one administrative village named Rudnerweide. Rudnerweide came under the control of Nazi Germany during World War II until February 1945, when it was occupied by Soviet forces and returned to Poland. In 2013 Rudniki was a village in the administrative district of Gmina Ryjewo, within Kwidzyn County, Pomeranian Voivodeship.

Mennonites who were residents of Rudnerweide were members of the Tragheimerweide Mennonite Church.