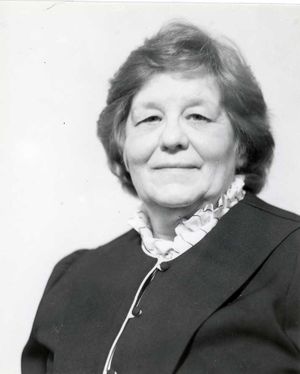 Emma Elizabeth Sommers Richards: missionary and first woman ordained as a pastor in the Mennonite Church (MC), was born 17 March 1927 to Monroe Sommers (12 January 1896-31 January 1978) and Nora "Effie" Horner Sommers (30 June 1897-24 November 1976). She was the second oldest in a family of two daughters (Elaine and Emma) and three sons (Daniel, Elvin and Samuel). Emma grew up in Plevna, a small hamlet in Howard County, Indiana, USA. Her father worked away from home, operating equipment at a gravel "scoop" that provided gravel for road building during and after the Depression. On 24 May 1953 she married Evan "Joe" Richards (11 June 1929- ); they had one son (Evan Samuel) and two daughters (Kathryn Ruth and Lois Elizabeth). Emma died 6 September 2014 in Goshen, Indiana. She is buried in the Venedocia Cemetery, Van Wert County, Ohio.

The Sommers children grew up in the Howard-Miami Mennonite Church, about three miles from the family home. Emma was baptized into that congregation in spring 1939, by her uncle, Bishop Anson Horner. She attended the Greentown public school, located five miles from home. She left the public high school after three years, partly because of the pressures put on Mennonite students during World War II. She took her last year of high school at Hesston Academy in Hesston, Kansas, and graduated in 1945. This year was crucial in Emma's development, as the previously shy girl gained personal confidence in her abilities, particularly in speech class.

Emma Sommers then attended Goshen College and earned a BA in Bible and Speech in 1949; during these years she developed a conviction to become a missionary to Japan. The year after graduation, Emma worked on requirements for a BDiv degree, and finished those requirements at Eastern Mennonite College. While waiting to go to Japan as a missionary with a friend, Emma taught speech at Bluffton College (Ohio) as a sabbatical replacement. A member of the class on play production was E. "Joe" Richards, who became her husband in 1953. Joe was Presbyterian in heritage, but joined with Emma in the Mennonite Church. While Joe completed seminary studies in 1953/54, Emma taught English part time at Goshen College. The birth of their first child in May 1954 ended Emma's academic career.

At the end of 1954 Emma and Joe Richards began service as missionaries in Japan. Joe had been ordained as a minister at the College Mennonite Church in Goshen prior to their departure. Their service began in Tokyo, combined with language study, and it was here that Emma occasionally began to preach. After 1956 their service was primarily in Hokkaido, first in Hombetsu, and beginning in 1963, in Sapporo, where Emma again began to preach more regularly.

After returning to the USA in 1966, both Emma and Joe Richards worked on MA degrees in education, to qualify for teaching in the public school system. During this time Joe took an interim pastorate at a Presbyterian church on the condition that Emma share the preaching with him.

In 1968 Joe became a part time pastor of the Lombard Mennonite Church in Lombard, Illinois, where he preached twice a month. Both Emma and Joe also took teaching positions in the public system at the same time. On Easter Sunday morning in 1970 Joe woke up with laryngitis and was unable to speak. Emma agreed to provide a "meditation," which was well received. She then became a regular "guest" preacher on Sundays when Joe was not scheduled.

In late 1971, after Joe had taken on more responsibilities at his school, he considered resigning his pastoral position. Instead the congregation urged Joe and Emma Richards to become a pastoral team. The congregation formally approved this step on 7 November 1971. The congregation, following Mennonite custom, then asked the Illinois Mennonite Conference to ordain Emma as a minister. This was initially denied when proposed in a conference delegate meeting in June 1972. However the delegates did approve that Emma be licensed as minister, which took place on 15 October 1972. She was ordained as a minister on 17 June 1973, the first Mennonite woman in North America to be ordained for pastoral service in a Mennonite congregation. Ann Jemima Allebach has been ordained in the General Conference Mennonite Church in 1911, but never served as pastor in a Mennonite congregation. Janet Douglas had been licensed as a pastor in the the Mennonite Brethren in Christ church in 1882 and served in congregational ministry, but was never formally ordained.

Emma and Joe Richards served as co-pastors at Lombard until 1994. For two years they then served as interim Conference Ministers for the Illinois Mennonite Conference. This would have involved resourcing congregations making pastoral changes or encountering congregation-pastor conflicts. They also would have been involved in the ordination of other ministers.

They retired to Goshen, Indiana after completing their ministry. Reflecting later on highlights of her ministry, Emma Richards mentioned the Women in Ministry conferences that began at Lombard, Illinois in 1975, and continued into the 21st century. She also gave major addresses at the Mennonite Church biennial assembly in 1979 and at the Mennonite World Conference meetings in Strasbourg, France.

Emma Sommers Richards was a pioneer that paved the way for many women leaders in the Mennonite Church in the decades following.

Horsch, James E., John D. Rempel and Eldon D. Nafziger, eds. According to the grace given her: the ministry of Emma Sommers Richards. Elkhart, Indiana: Institute of Mennonite Studies, 2013.