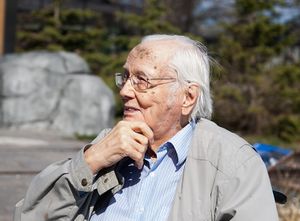 Walter Regehr: teacher and church leader; born on 6 January 1928 in Herbert, Saskatchewan, Canada, to Katharina (Siemens) (29 October 1902-16 February 1992) and Heinrich (3 July 1898-23 November 1991) Regehr. He was the third of seven children in the family. Walter was baptized on 1 September 1946 in Altona, Manitoba, Canada. On 18 August 1951, he married Margaret Jane (Peggy) Unruh, daughter of Abram A. and Anna (Enns) Unruh in Winkler, Manitoba. The couple had three children, all of whom survived childhood. Walter worked as a teacher, preacher, and minister until his retirement in 1986. When Peggy became ill, Walter cared for her until her death in September 2018. After that, Walter’s health also declined, and he died in Winnipeg on 8 December 2018.

In his early years, Walter Regehr and his family moved several times for his father’s teaching jobs. The family consisted of two older brothers who came before Walter, as well as three younger sisters and a younger brother. The family moved from Herbert to Vancouver, British Columbia, and then to Gretna, Manitoba, and finally to Winnipeg, where Walter finished his basic education. Following high school, he attended Normal School to become a teacher. He was baptized on 1 September 1946 in Altona, Manitoba.

Despite becoming ill with tuberculosis and being unable to study for several months, Walter Regehr finished teacher training and began his career. His first job was working at a one-room school in rural Manitoba, Polson School, where he remained until 1951. Soon, however, he began summer and evening courses in Winnipeg, where he obtained a Bachelor of Arts and a Bachelor of Education. Although he had to opportunity to pursue a Master of Education degree, he decided instead to spend more time with his family after marrying Margaret (Peggy) Unruh on 18 August 1951. Walter and Peggy's daughter Janet was born in 1952 and their son Keith in 1955.

Walter and Peggy Regehr, together with their two older children, moved to Winnipeg in 1955. The younger son, Gerald, was born there in 1960. Walter became principal of Crane School in what later became the Fort Garry School Division, and his third teaching job was at Ralph Maybank School, where he remained until his retirement in 1986.

Meanwhile, Walter Regehr was busy in other areas of his life. He preached regularly at Portage Avenue Church, where he and Peggy were members, and also at River East Mennonite Brethren Church and Lions Manor Personal Care Home. He served as Sunday School superintendent for some time and following his retirement, he began mentoring a number of young men from the church. In addition, he took on translation work at the Centre for Mennonite Brethren Studies, where his major projects included working on a collection of primary documents, as well as a history of German Baptists in Ukraine.

For the last ten years of his life, Walter Regehr spent much of his time looking after Peggy, who suffered from Alzheimer’s Disease. Following her death in September 2018, Walter became increasingly frail, and he died at the age of 90 in Winnipeg on 8 December 2018.

Walter Regehr was a dedicated teacher and church leader whose work helped many people, both those whom he mentored and others who were able to benefit from his teaching. Despite the struggles in his life, he was a good example for future generations to follow.