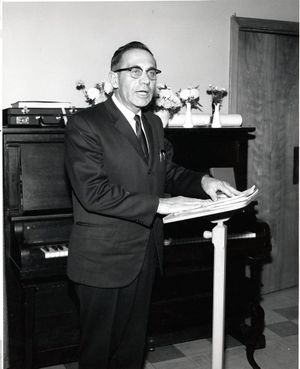 Henry P. Penner: pastor and church leader; born 29 July 1918 in the village of Friedensruh, Molotschna Mennonite Settlement, South Russia, the fifth of seven children born to Peter F. Penner (1 July 1883 - 4 July 1955) and Katharina (Dekker) Penner (30 March 1886 - 24 September 1974). Henry immigrated to Canada with his parents and siblings in 1926. He became a follower of Jesus in 1933 and was baptized in September 1938, becoming a member of the Vineland Mennonite Brethren Church (Vineland, Ontario). Henry Penner married Lydia Dick (30 Apr. 1921 - 9 May 2008) on 18 August 1946 in Coaldale, Alberta. They lived in Jordan, Ontario until 1951 when they moved to St. Catharines. Henry and Lydia had six children. Henry died 10 January 2009 in St. Catharines, Ontario, and was buried in the Vineland Cemetery.

After moving to St. Catharines, Henry and Lydia joined the St. Catharines Mennonite Brethren Church. Here he was called to pastoral ministry and served as leading minister from 1953-1973, 1977-1983, and 1987-1989. For twenty-seven years, he shaped the growth of this church. First of all he helped bring in the English language – first as one service in English per month, then by adding a childrens’ story which became a short English sermon in a German service. He preached on a radio program produced weekly on a local station after the Sunday morning service, and also on other radio programs. Henry provided leadership as the congregation formed an English-speaking daughter church in 1964, the Fairview Mennonite Brethren Church, and changed its own name to Scott Street Mennonite Brethren Church. A second English speaking daughter church, the Grantham Mennonite Brethren Church, opened in 1973. Other growth that took place during his tenure at the Scott Street Mennonite Brethren Church included building the Tabor Apartments and Tabor Manor for seniors next to the church. Also an education wing with a gymnasium was added to the church building during his leadership.

The Scott Street congregation Henry ministered to started with predominantly Mennonite immigrants that had come to Canada in the 1920s, and continued to grow with subsequent waves of immigrants from post-World War II Europe and South America. Henry nurtured their spiritual and emotional needs with his many visits and by ministering to them in the German language.

Henry Penner’s deep faith in God, his care and compassion for the members of the congregations and his dedication to serve Christ and the church, remained firm to the end.